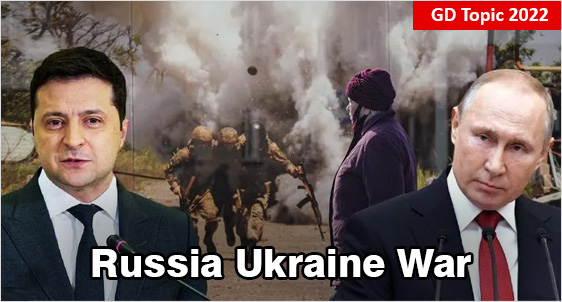 The ongoing Russian Ukrainian war since February 24, 2022 is again derailing the world economy which is struggling to take-off after three phases of the Covid-19 pandemic. On the 12th day of Russia and Ukraine conflict, oil prices have soared to $135 per barrel, fuelling further the inflation in the war torn world. Apart from the global economic alarms, a key Russia Ukraine war impact on India is that the thousands of Indian students are stuck in Ukraine and are facing hardships in evacuation process as they find it very difficult to reach the Poland or Romania borders which are many miles away in the shadow of bombs, bullets and missiles.

The Russia Ukraine war primarily involves Russia and pro-Russian forces on one side, and the small country of Ukraine on the other.  The Ukraine intervention is directly challenging the US and NATO. Russia has made it clear in its communication that any attempt to bring Ukraine into the NATO fold will have consequences.

Ukrainian President Volodymyr Oleksandrovych Zelensky has urged European Union countries and President of USA to intervene and save the lives and Ukraine but nothing has happened so far. On March 7, 2022, the talks between Russia and Ukraine also could not succeed in cease fire. President Joe Biden and his administration did not give this assurance, which would have definitely de-escalated the situation. Instead, warlike stores were supplied, hoping that the Ukrainian forces would be able to stall the offensive. US / NATO have been condemning the intervention but have not clearly stated the red lines which might have disastrous effects globally. Thousands of Indian students in Ukraine are stuck, although Government of India is making all out efforts to evacuate them during this Russia and Ukraine conflict

The cause of Russia Ukraine War
Russia has been supporting the separatists in the Eastern region of Ukraine and as per media reports, these separatists were being engaged by the Ukrainian forces. On their request, President Putin of Russia sent in the troops. The Putin – Xi Jinping meeting on the sidelines of the Winter Olympics seems to have been the occasion to orchestrate and set the stage for the Russian Ukraine Crisis. Both the leaders see the US and European leadership as weak and incapable of taking a hard decision.

In 2021 and early 2022, there was a major Russian Military build up around Ukraine's borders. NATO accused Russia of planning an invasion, which it denied. Russian president Putin criticized the enlargement of NATO as a threat to his country and demanded Ukraine be barred from ever joining the military alliance. He also claimed that Ukraine was a historic mistake created by the Soviet Union. On 21 February 2022, Russia officially recognised the two self proclaimed states in the Donbas, and sent troops to the territories. Three days later, Russia launched a full scale war against Ukraine.

Russian Ukraine Conflict has been seen as a serious breach of international treaties and a violation of a sovereign country. Russia believes Ukraine was an artificial creation of the Bolsheviks after Brest Litovsk in 1917 and “never had a tradition of genuine statehood”.

Despite a spree of sanctions announced by USA and other western countries, Russia is unlikely to stop the advancement. The West is unable to activate serious measures as it risks an asymmetric response, a lighter variant of ‘mutual assured destruction’ from the Cold War.

Post the implosion of the erstwhile USSR in 1991, the cold war era came to an end as most of the Warsaw Pact countries, having become independent countries, joined NATO. The US and its NATO allies are unable to find a concrete solution of the Russian intervention and Ukraine is left to fight against the many size bigger Russia. Europe has witnessed the cold war and with Russian Ukraine Crisis getting deeper, it wouldn’t want to be caught in this imbroglio.

A few days ago, finance minister Nirmala Sitharaman had flagged concerns over the after effects of Russia's invasion of Ukraine and said that never has global peace faced challenges of this significance since World War-II. "India's development is going to be challenged by the newer challenges emanating in the world. Peace is being threatened and after the Second World War, (a) war of this significance, this impact, on the globe probably is not felt," Sitharaman had said. The finance minister had assured that the government is closely monitoring the situation in Ukraine.

No Transactions for Russian Entities

Impact on Trade
India runs trade deficit with Russia, with exports declining while imports are increasing. Oil forms a major part of India’s import basket from Russia. The report said that 2.8 per cent of India’s total imports have been from Russia in FY22 so far.

India's merchandise trade position with Russia, Ukraine
2.8% of our total imports are imported from Russia in FY22 so far (Figures in Rs crore)

Impact on GDP Growth
With limitations on trade, banking and corporate sector, SBI report expects negligible impact of the Russia-Ukraine conflict on Indian economy and added "The economy seems poised to enter a high growth (9.2 per cent in FY22 over -6.6 per cent in FY21), low inflation (4.5 per cent in FY23 vs. 5.3 per cent inFY22) phase,"

Indian Students at Ukraine: Thousands are stuck
‘Operation Ganga’ is being conducted to evacuate the thousands of stuck Indian students in Ukraine. Most of these students which include both boys and girls went to the Ukraine to pursue MBBS after paying hefty amount of fees.

Out of the 21000+ Indians who have come out of Ukraine, more than 20,000 have reached India under ‘Operation Ganga’ – the Government of India programme to evacuate the Indians stuck in Ukraine. However, the most difficult part for the stuck Indians is reach the Ukranian border as they do not find good means of conveyance from the bunkers in Ukraine where they are hiding due to the War, to the border. However, the Prime Minister of India, Shri Narendra Modi has announced that all out efforts would be made to evacuate even the last Indian in Ukraine under Operation Ganga. So far more than 80 flights have brought back thousands of Indians back home

Hope this topic discussed in detail must have been found useful for you to know about the Russian-Ukraine Crisis and its pros and cons. MBAUniverse.com will post more relevant topics to help you getting through the GD, WAT and PI round