Farmers’ Income: Will India be able to double it in next 5 years? 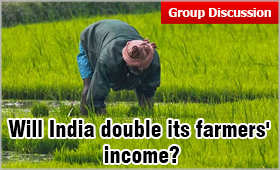 The agriculture based Indian Economy needs high agriculture income for the farmers who feed the 1.25 billion Indian population. Not only this like developed countries who despite having much lesser area under cultivation, export number of farm products, India also needs to be a prominent exporter of agriculture produce. This will attract more and more people towards agriculture, the backbone of the country.

But how to achieve the dream of substantially increasing the farm income is a big question. The Prime Minister of India, Shri Narendra Modi in his independence day speech on August 15, 2017 laid out the route map to double the agriculture income in next 5 years.

Key points: How to double the farmers’ income- the road map

Income to increase with Israel model
The Prime Minister Modi’s Israel visit has placed a heavy stress on agricultural cooperation. The government’s stated aim is to double farmers’ incomes by utilizing the Israel model. It is felt that Israeli agriculture and irrigation technologies can help deliver this goal. Israeli technology is vital for this aim and thus encapsulates the government’s thinking on how to raise agricultural productivity and thereby increasing the farmers’ income.

What is Israel model?
Israel’s water management system is second to none. When the nation was founded in 1948 it realized that it was severely water stressed. 60% of the land in Israel was desert and the annual rainfall was 50 cm. There are no such rivers like Ganga, Yamuna, Kaveri, Brahmaputra, Godavari, Narmada, Betwa in Israel nor there is any chance of water sharing in neighborhood. Rainfall has fallen to half the level of 70 years ago while the population has grown 10 fold according to Israeli newspaper Haaretz. Israel thus had to come up with innovative water solutions to increase its agriculture production manifold with the scarce water it has.

Centralized Water Management: Solution found
Israel had to find the solution to the crisis and the result is a centralized water management grid, developed over the decades to make maximum use of water. The major strategy of the solution is drip irrigation. Instead of flooding fields, water is delivered directly to the crop/plants roots in small quantities.

Indian Agriculture far behind with excessive or no water
A quick comparison of Israel model to Indian agriculture will surprise us all. Only a small portion of Indian agriculture is irrigated, mostly through canals. The canal network is most extensive in North India, particularly Punjab, Haryana and Northern Rajasthan, and relies on excessive use of water, leading to water stress and overuse.

The farmers in these regions think that if more water is delivered to their fields, the higher will be the productivity. This attitude is being severely challenged by changing water patterns due to overuse and climate change.

Action taken so far to increase farmers’ income
The government and NABARD are keen to push farmer-producer companies where a large group of farmers pool their land together and work as a collective. They could be registered as a non-profit, company or trust, would produce business plans and access capital from formal banking channels.

Maharashtra has already asked the Israeli Consulate in Mumbai to prepare a plan for establishing a farmer-producer collective in Dehni village in Yavatmal district, which has one of the highest incidences of farmer suicides.

India has already adopted drip irrigation in some parts of Maharashtra, Gujarat and Haryana. An article in Forbes India in 2010 reported that the Israeli firm Netafim, the world’s largest micro-irrigation company, indigenized its Family Drip System (FPS) for mainstream farming in India. Drip irrigation is now available for farms that are as small as a quarter acre.

Indian and Israel governments hope to take the partnership forward by providing a government to government framework that would enable corporate partnerships to flourish.

Mammoth task
Doubling agricultural income by 2022 is a mammoth task but is also one that is the need of the hour. With majority of the country’s population dependant on agricultural activities, no true development can be said to be meaningful unless it incorporates the needs of this sector. Increasing farmer suicide rates and increasingly erratic weather patterns further add to the problem. There are intense complexities and therefore, the focus of the government on this sector is much needed. The journey to double the farmers’ income is a long and very tedious but the journey has begun. The need is to ensure that the implementation in right direction by all stakeholders is uniform, effective and done whole heartedly.