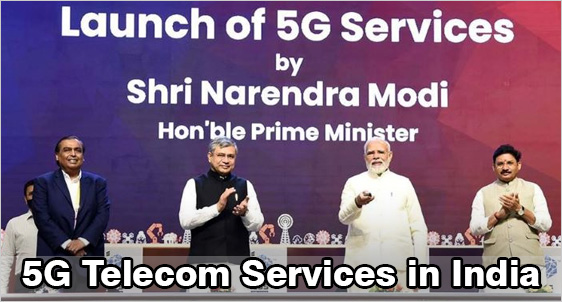 Ushering in a new era of technology, Prime Minister of India Narendra Modi launched the 5G telecom services in India on October 1, 2022. The technology of 5G Services provides many benefits including seamless coverage, high data rate, low latency and highly reliable communications system. 5G in in India is also expected to help in achieving the economic goal of making India a $5-trillion economy by 2024-25. According to experts, 5G Services will have a cumulative economic impact of $1 trillion by 2035. Given the importance of 5G services in India, this topic is expected to feature in Group Discussions and Interviews for MBA admissions. This MBAUniverse.com article will prepare you for GD PI WAT on 5G telecom services in India.

Before we progress, lets understand the basics first.

1G, 2G, 3G, and 4G all led to 5G services, which is designed to provide more connectivity than was ever available before. 5G technology is a unified, more capable air interface. It has been designed with an extended capacity to enable next-generation user experiences, empower new deployment models and deliver new services. With high speeds, superior reliability and negligible latency, 5G will expand the mobile ecosystem into new realms. 5G will impact every industry, making safer transportation, remote healthcare, precision agriculture, digitized logistics — and more — a reality.

10 ways in which 5G network in India could change consumers
After PM Modi Launched 5G Services In India on October 1, 2022, the 5G connectivity in India can bring many benefits and changes due to 5G services for the consumers.

5G Technology: What Are Its Advantages and Disadvantages
Let’s have a look at the pros and cons of 5G technology.

As discussed, 5G services in India provides many benefits including seamless coverage, high data rate, low latency and highly reliable communications system. There are some limitations and disadvantages too. Given the importance of 5G telecom services in India, this topic is expected to feature in Group Discussions and Interviews for MBA admissions. So, prepare well!