MBAUniverse.com News Desk | :
April 30, 2019
IIM Kozhikode has awarded full fee waiver to 12 toppers coming from the states of Delhi, Gujarat, Haryana, Karnataka, Maharashtra, Rajasthan, Tamil Nadu, Telangana, Uttar Pradesh and West Bengal to pursue their PGPM 2019-21 programme. These toppers include General Category students, women, NC-OBC, SC, ST and PwD category candidates. These toppers will need to pay only for their boarding and lodging while others shall have to pay more than Rs.19 lakhs 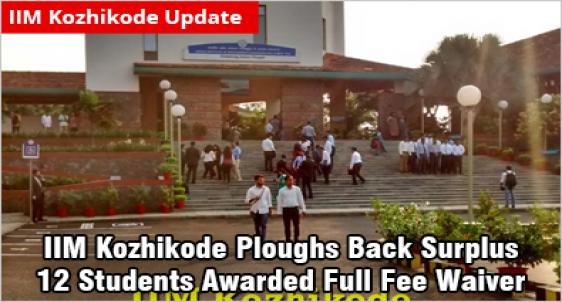 While other IIMs including IIM Ahmedabad have increased their fee structure again in 2019, IIM Kozhikode has set the precedent by awarding full fee waiver for the entire course to these meritorious students. It may be noted that the fee for PGPM programme at IIM Kozhikode is Rs.17.50 lakhs and is to be revised upwards shortly.

The diverse dozen toppers who have been awarded full fee waiver will need to pay only for their boarding and lodging while others shall have to pay more than Rs.19 lakhs for the course.

In 2012, IIM Kozhikode had also reduced its tuition fee by Rs.30,000/- and set the trend. There are more than ten percent students coming from low income group families and joining IIM Kozhikode every year. The annual income of the families of such students is less than Rs.1 lakh. By providing the full fee waiver to 1% meritorious students who have excelled in academics, sports, extra-curricular, social activities, or belong to the family of martyred military, paramilitary or police force, IIM Kozhikode is providing them equal opportunity. In view of Dr Debashis Chatterjee, Director of IIM Kozhikode, “By giving them a full fee waiver, we feel it will have an will have an aspirational value for topping the charts in each category.”

IIM Kozhikode grants half fee waiver to children of defence or allied services personnel who were injured during the action and lost their earning capacity.

IIM Kozhikode has made a total of 833 admission offers to the successful candidates. Out of them 595 are male and 238, coming to approximately 28.5%, are female candidates. 676 candidates are engineers and 581 are equipped with work experience.

Dr Chatterjee has emphasized that the initiative has not been taken out of any compulsion but is a voluntary gesture from IIM Kozhikode that amounts to ploughing back the surplus to honour the biggest stake holders of the institute – the meritorious students.

IIM Kozhikode, one of the six top IIMs, had changed substantially its Admission Criteria 2019 for its PGP 2019-21 batch. CAT 2018 cut offs and weightages to CAT score as well as to other parameters in admission process to PGP 2019-21 batch were reallocated. A new component ‘Resume’ with 10% weight was also added to the final selection process components. As against last year admission criteria, No weightage to bachelor’s degree or to female candidates has been awarded in the admission process 2019.

One of the biggest shortlisting parameters in IIM Kozhikode admission criteria 2019 was its high weightage to CAT 2018 score which carried a weight of 75% as against other top IIMs who award lower weight to CAT scores.

IIM Kozhikode joined the family of IIMs in 1996 with its first PGP batch of 42 students in 1997 and has grown over the years with a batch strength of 356 odd students making it the fastest growing management school in the country.IIM Kozhikode has a strong International Exchange Programme for students and faculty with several leading Management Institutes in EU and ASEAN countries like SDA, Bacconi, Jonkoping, Sweden, Copenhagen Business School, Denmark, ESCAP-EAP, France; University of Queensland, Austria, Victoria University of Wellington among others.

IIM Kozhikode is ranked 8th in the MHRD NIRF 2019 Rankings and 7th in MBAUniverse.com Rankings 2017-18 among top 100 B-schools in India. Accredited by AMBA, IIM Kozhikode boasts of one of the most picturesque and oxy-rich campuses in the country. The infrastructure includes air-conditioned classrooms, guest care areas and LAN/WAN connectivity. It is considered as one of the most efficient Institutions in the country.

IIM Kozhikode is led by its Director Dr Debashis Chatterjee, a pioneer in the field of Asian models in leadership. He is credited with transforming IIM Kozhikode from an obscure regional school to an institution of national impact and global recognition.