Brevity is the soul of wit 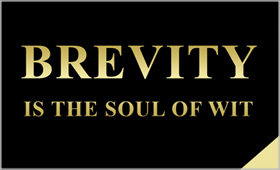 The essence of a witty statement lies in its concise wording and delivery. You are supposed to speak or write a well managed piece which must be to the point and should justify the topic. I can opt to be brief in my speech or writing and to the point simultaneously only if I have the clarity of thoughts and know how to present my view point. Otherwise, I will end up speaking or writing lengthy and ambiguous sentences.

Shakespeare’s Hamlet: Sracastic use of the phrase
It is the real art of speaking and using the phrases as done by William Shakespeare in ‘Hamlet’. This proverb is the based on the words of Polonius I “Hamlet” by William Shakespeare. ‘Brevity is the soul of wit’ is the phrase of the multiplicity of meanings. In the first sense, it means that a good piece of writing or a good speech should be brief and concise. And in another sense, it implies that the funny speech should be short. Otherwise, it tends to lose and decrease its flavour. ‘Wit’ here refers to ‘knowledge,’ ‘wisdom,’ ‘Intelligence’ during the Shakespearean era.

Speech of Marc Antony: Turning the crowd in his favour
Most of us are aware of the famous sarcastic speech by Marc Antony in the tragedy drama ‘Julius Caesar’ by William Shakespeare. It had desired impact and turned the tables against conspirators. The political extravaganza ‘The Apple Cart’ by George Bernard Shaw is full of sarcasm and witty brief speeches by the Monarch (The king/queen). It creates the intended effect by remaining in readers’ memory.

Constitution of India: Impact of Preamble
Written constitution of India contains hundreds of pages despite that it is briefly written in a well worded as well as explanatory language.  For example, ‘WE, THE PEOPLE OF INDIA, having solemnly resolved to constitute India into a SOVEREIGN SOCIALIST SECULAR DEMOCRATIC REPUBLIC’

No time to listen to long speeches
If you happen to listen to a short speech with few meaningful words which are very sensible and concise, you will listen to it attentively. But if we listen to long speeches, we do not show much interest to hear such long and boring piece. This is the reason that those who make their statements and sentences as short as possible emerge as winners than the ones who stretch them long.

‘Brevity is the soul of wit’ implies the use of concise and exact use of the words in writing and speeches. It is opposed to long and complicated sentence structures. The phrase is mostly used as a sarcastic remark in response to endless nonsense chattering. The modern writers use this idea in their essay, copywriting and fiction. Politicians use it in their speeches to keep their audience glued to them.

Thus if I am talented, I would be able to select the right words so that the idea is clearly understood by all. It is like a pond that is crystal-clear. We can see what is at the bottom. A long speech or statement will quickly bore the listener or the reader. His mind shuts itself out. This makes the speech or statement useless for its purpose. Therefore, if we want to express our ideas clearly, we must learn to put them in the briefest and aptest way.

Witty remark can be concise
The hardest human activities that shouldn't be difficult is power of expression. A witty remark need not be an elaborate one. It can be brief and at the same time striking. The most humorous flashes of wit are often the shortest.

Just like wit, the ability to express ideas in the briefest manner requires much intelligence. A person can go on speaking or writing without anything meaningful in it. There is no point at all in doing so. What he should do is to condense it to a short but meaningful sentence such a sentence can be highly striking. It enters the hearts of the people. It creates the intended effect by remaining in their memory. Such a sentence is lasting and has a great effect upon the listeners.

Most people would have no problem walking up to a group of friends and entering into a conversation. When surrounded by our clique we can prattle on for hours, many of us oblivious to what we are actually saying from one moment to the next.