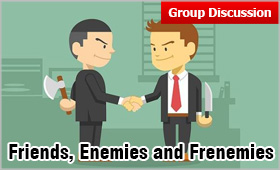 Who is a friend and who is a foe? The distinction between the two is easier than finding out an enemy in disguise – Frenemy! Merriam Webster dictionary defines friend as someone who is attached to another by affection or is a favored companion. An enemy is someone who is antagonistic to another person. The word Frenemy was added to the Oxford English Dictionary in 2008.This term itself is an oxymoron and means someone who pretends to be a friend but is actually an enemy.

While you know well your defined enemy, the frenemy is difficult to pick and could ditch you whenever you need a helping hand. The word Frenemy, is one of the wonderful, comic neologisms which became popular after it was mentioned on the TV drama, ‘Sex and the City’. It describes those situations where someone smiles to your face, but eventually proves true to have had ulterior motives.

Frenemy is someone who gives you praise one moment, but spreads gossip unnoticed the very next. It is someone who acts as a consultant, for a service, or for guidance, but is never on your side.

Frenemies could be more dangerous than enemies as you are not aware about them although you are well aware about the enemies. It happens in an individual’s life very often and holds true about a country also. A Frenemy may become a part of one’s circle due to:

Why Frenemies are Harmful?
In a fast paced world where quality relationships are hard to find and maintain it becomes very crucial to know who your real friends are and who are just impersonating.

Frenemies often crave intimacy in relationships and want to know everything about us over a short period of time. They tend to share their life’s story, including highly personal details. They effuse with praise at the beginning of the relationship but begin to mix it with mild criticism later and, eventually, insults. They have an affinity for negative information and always dig for more.

It is considered that ambivalence nature of Frenemies is harmful, largely because people don't know where they stand in a relationship and this can cause stress.

Recognize and Use Frenemies to Avoid Stress
According to a research conducted by Shimul Melwani, an assistant professor of organisational behaviour at the University of North Carolina, Frenemies in the work place, could make you better at your job.

So, to avoid stress and distraction it is advisable to recognize your frenemies and deal with them effectively. It is advisable to not to share anything about your personal life to anyone in your organisation – howsoever close he/she may be to you. Always be wary of people who talk about others to you. They can talk about you too to others.

A Country can have Frenemies
Those who have gone through past 50 years history reading may be aware that India has suffered a lot due to these Frenemies.

China, India’s Frenemy in 1962: India had lot of trust on China and even represented it on various International forums advocating its cause as China was excluded from being invited at top International Platforms. India always praised China and sang ‘Hindi-Chini Bhai Bhai.’But China betrayed India bitterly as India never suspected that China would ever launch an attack, but it did. India was attacked on October 20, 1962 in what famously came to be known as Sino-India war of 1962. The belief of not ever being attacked by China did not let the Indian army prepare and the result was the standoff between 10,000-20,000 Indian troops and 80,000 Chinese troops. The war continued for about a month and ended on November 21, 1962, after China declared a ceasefire.

Kargil 1999 by Pakistan: Despite being a known enemy of India, Pakistan was extended a gesture of friendship by the then Indian Prime Minister Atal Bihari Bajpeyi who travelled in a bus from India to Pakistan. While the steps of friendship were being taken, Pakistan chose to attack India in Kargil-Dras sector of Jammu & Kashmir in May 1999. However, the alert Indian Troops and Air Force retaliated in full force making Pakistan retreat. But since then, India no more trusts Pakistan as it prefers to stab in back.

Kargil war took place despite the two nations signing the Shimla Agreement that stated that no armed conflict shall take place on the said boundary. The Indian and Pakistani armies fought the Kargil War in May-July 1999 in Kargil and elsewhere along the Line of Control (LoC).