Me Too Campaign: Tool to Trap or Breaking Silence to Win the War 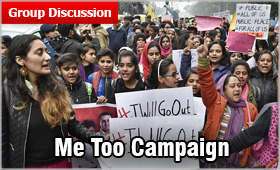 Year 2017 that sparked off the #Me Too campaign after the Harvey Weinstein scandal in the US has motivated the women to throw allegations in India especially the Bollywood and Media arena, after the actor Tanushree Dutta accused her co-star Nana Patekar of sex harassment during a film shoot that happened 10 years ago.  Editor turned politician MJ Akbar in October 2018 also became the most high profile person to exit his job when he stepped down as the minister of state for external affairs after multiple women had accused him of sexual misconduct that is said to have taken place years ago.

#MeToo: A Tool to Trap Men?

The women alleging sexual harassment on Akbar are now facing defamation suits. He is alleging a conspiracy to harm his hard-eared "reputation." Many men in the fields of art, media and films have been called out by women who accused them of sex harassment and inappropriate behaviour. Are these allegations correct or are made to hit headlines which later result in defamation suits against these women? Cases in courts filed by these women for the alleged sexual harassment that is said to have happened 10-15 years ago, have started piling up. One of the interesting facts is that only famous personalities are being made accused in these cases.

Bollywood actors Alok Nath (Granted Anticipatory Bail); Nana Patekar; former executive vice chairman of The Energy and Resources Institute R K Pachauri are among the many renowned personalities who are facing the brunt of MeToo campaign and trying to get their reputation back. Many of the accused men have filed defamation suits against these women filing cases against them for sexual harassment. Are these the accusations without evidence which have become a viral fever or there is substance to it, is difficult to determine now.

'Me Too' or #MeToo is a movement which was initiated in 2006 by a social activist Tarana Burke against the dire concern of the masses on the matter of sexual abuse and harassment in America.

The movement started to gain recognition in October 2017 after Alyssa Milano, an American actress posted a tweet asking the victims and survivors of sexual assault to come out, accepting the bitter truth of the society and letting others know that they are not alone.

Back Ground: Where it all Started

Union Minister of State for External Affairs, MJ Akbar resigns
Union Minister of State for External Affairs, MJ Akbar resigned from his post on October 17, 2018 over sexual harassment charges levelled against him by several women journalists. Akbar's resignation came two days after he filed a criminal defamation complaint in a Delhi’s Patiala House Court against journalist Priya Ramani, who was the first to put #MeToo allegations against Akbar. Following Ramani's complaint, as many as 20 women came out in support of Priya Ramani, accusing Akbar of sexual harassment and inappropriate behaviour when he worked as an Editor in 'The Asian Age' newspaper. The journalists urged the court to hear their testimonies against Akbar.

Government sets up committee
A week after former minister of state for external affairs M.J Akbar resigned from his post, a committee of a group of ministers was set up, headed by Union home minister Rajnath Singh and comprising Road Transport minister Nitin Gadkari, Defence minister Nirmala Sitharaman and Women and Child Development (WCD) minister Maneka Gandhi. The group has now been given a timeline of three months to address the issue. The GoM will now be required, within the next three months, to examine various provisions for the safety of women and recommend further measures required to strengthen and make them more effective. The WCD ministry has also launched an electronic complaints box that enables women to bring to light any complaints of sexual harassment at workplace.

The movement arrived in the Bollywood in 2016  is spreading through India. The movement has recently gained momentum in India as more women have begun sharing their experiences of sexual harassment on social media.

The #MeToo movement started after former Bollywood actress Tanushree Dutta alleged that Nana Patekar sexually harassed her on a movie set in 2008. However, Patekar has rejected Dutta's allegations and said he made the same denial 10 years ago. Since, Kangana Ranaut, actress Sandhya Mridul, writer-director-producer Vinta Nanda, singer Sona Mohapatra too have accused their male colleagues for harresment.

Huge Celebrity Involvement:
There were thousands of tweets stating #MeToo including famous celebrities from Hollywood such as:

Positive Impact of the Movement

Tips to improve participation in GD Round
The above discussed topic is one of the most talked about issue and has been carefully chosen and solved with the sole aim to help you succeed in GD round. If you follow a few key tips, you can improve your participation and scores on this GD topic and others: