Agriculture Vs Manufacturing Industry in India - priorities for future 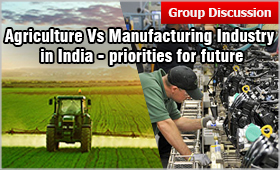 Number of steps are being taken up to achieve the goal. The Prime Minister of India, Shri Narendra Modi has reiterated the government’s target that it wants to double farmers’ income by 2022 and said “With ‘Beej se Bazaar Tak’, we are bringing exceptional reforms in the agriculture sector.”

Key Facts about the state of Indian Economy

Generates Trade Surplus: India’s share in global agriculture produce is 7.68%.  India has maintained an overall trade surplus in agriculture since 2000s. The overall trade (exports+ imports) has also grown. India’s relative comparative advantage in agriculture is greater than that in manufacturing and commercial activities.

Generates greater investible surplus & savings: The rise in agriculture output and income can expand the market for manufacturing sector. The migration of surplus labor from agriculture to manufacturing. This supports urbanization and industrialization as it did in England in 19th century.

Constraints in Agriculture Sector
The low contribution of agriculture to GDP despite 49% of the labor force in the sector shows the inefficiencies in the sector as seen by:

Agriculture Bias: Farmers have not been able to fully exploit the comparative advantage in agriculture exports due to overvalued exchange rate, tariffs and quota restrictions on trade of agriculture products.

How to Improve Agriculture Role:

Role of Manufacturing Industry in India:

How to improve Manufacturing Industry Role:

Tips to crack GD round
The above discussed topic is one of the most talked about issue and has been carefully chosen and solved with the sole aim to help you succeed in GD round. If you follow a few key tips, you can improve your participation and scores on this GD topic and others: