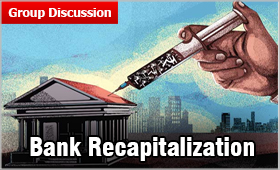 There are 21 Public Sector Banks which are the state-owned banks in India. Public sector banks account for 70 percent of total banking assets in India. The ‘lack of dynamism’ in banking practices at the bank level and at the Finance Ministry level to control judiciously the flow of finance and recovery system to stop an account from turning into NPA, keeps these Public Sector Banks starved of funds and crying for more capital infusion every now and then.

Need for Recapitalization
Most of the PSBs have huge stocks of non-performing loans on their balance sheets.  As of June 2017, the NPAs of the banking system were as high as 10.2 % of the loans advanced by the banks. This ratio increased to 12.2% by the end of September 2017.

The volume of bad debt hit 9.46 trillion rupees at the end of half of financial year 2017 in September 2017. Out of this the share of public sector banks is 8.25 trillion rupees in the pile of bad loans. The banks' deteriorating balance sheets have limited their ability to lend, and that has affected the bank credit growth in India.

The bank credit growth in the year 2016-17 was 5.1 %, which is the lowest since 1951. Hence, a massive recapitalisation was deemed as necessary to clean up the balance sheet of the banks.

PSBs are capital constrained as the bad loans have hit their capital ratios due to provisions for NPAs and due to higher risk weights of bad loans. An ongoing bad debt problem in India has been running since 2012 when banks expanded lending at a fast pace, including to a number of problem sectors such as telecommunications and mining.

Recapitalization Tools worth Rs.2.11 Lakh crores
The Government has proposed the recapitalisation of banks worth 2.11 lakh crores which is to be done in following manner

NPAs: Cause of worry
These commercial banks have to indulge in various types of loss making finances where the recovery is either very low or no recovery. Even the principal amount is not returned by the borrowers and this gives rise in consistent increase of Non-Performing Assets (NPAs). These lending could be as per the directives of Government of India, classified as priority sector lending or could be big commercial finances like that of Kingfisher. The big and influential business magnets like Vijay Mallya of Kingfisher has swallowed thousands of crores of banking system and run away. All these factors make already fund starved banking industry cry for more capital.

Banks have to follow BASEL-3 norms. These are the international banking regulations that have to be followed by the banks in all countries. According to it, the banks have to maintain a capital-adequacy ratio of at least 8 %. The capital-adequacy ratio is the ratio of capital to the risk-weighted assets (loans etc) . Hence, more capital is required to be able to give more loans.

The government will infuse Rs. 88,139 crore capital in Public Sector Banks (PSBs) before March 31 to boost lending and to revive growth. This is part of the Rs.2.11 lakh crore bank recapitalisation plan announced in October 2017 last year.

Government also proposes to recapitalize the banks if they are ready to implement a series of reforms to get the funds, including improving their due diligence, allowing specialised monitoring for loans above Rs.250 crore, and limiting the number of lenders that can group together to dole out loans.

Despite using the taxpayer's money to get these public sector banks out of the financial crisis earlier also, the recapitalization of Rs.2.11 lakh crores to PSBs proposed now, is the largest till date.

Since tackling the root of the banking system's problems is the government's top priority to avoid another acceleration of bad loans, the huge funding may not be avoided. 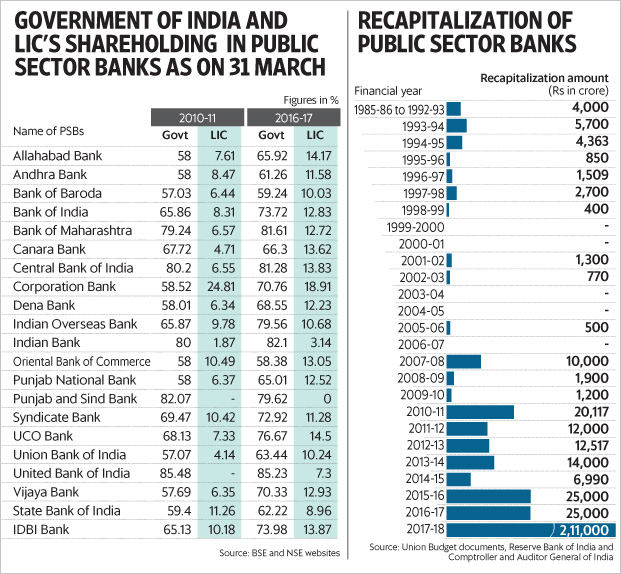 The re-capitalization no doubt will help the banks to comply with Basel 3 norms that will come into force in 2018 and may improve on their performance, it has to be ensured that the tax payers’ money is not misused and Banks do not become habitual of getting the support with another recapitalization in future.

Post Recapitalization Scenario: Losses and Deterioration in Asset Quality
Despite the recapitalization with the thousands of crores of public money infused in it to revive the asset quality, country’s biggest lender State Bank of India (SBI) on Friday February 9, 2018 posted a standalone net loss of Rs 2,416.37 crore for quarter ended December 31, 2017 against a net profit of Rs 2,610 crore in the corresponding quarter last year. Provisions and contingencies figures increased 111 per cent year-on-year to Rs 18876.21 crore for the quarter under review against Rs 8,942.83 crore in the same period last year.