Banks Merger in India: Is it good for Indian Economy? 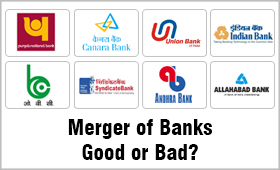 The largest ever merger in the public sector banking space in India has taken place on Wednesday April 1, 2020  when six Public Sector Banks were merged into four large banks in a bid to make them globally competitive. Customers, including depositors of the merging banks, will now be treated as customers of the banks in which they have merged.

Merger and Acquisition of Banks in India and its effects has become a favourite topic of Group Discussion in FMS Delhi, IIMs, MDI, XLRI among others. Apart from other B-schools, FMS Delhi also placed this topic in the final selection round in 2018. Below is shared the solved write up on the topic.

The Banks’ merger dated April 1, 2020 has resulted in the creation of seven large PSBs with scale and national reach, with each amalgamated entity having business of over Rs 8 lakh crore and it has helped to create banks with scale comparable to global banks and capable of competing effectively in India and globally.

As per the mega consolidation plan, Oriental Bank of Commerce and United Bank of India have merged into Punjab National Bank (PNB); Syndicate Bank into Canara Bank; Andhra Bank and Corporation Bank into Union Bank of India; and Allahabad Bank into Indian Bank.

The exercise assumes significance as it has taken place at a time when the entire country is under the grip of COVID-19 outbreak. It has triggered 21-day lockdown to contain the spread of the deadly virus. Experts are of the opinion that merger at this point of time may not be remain a very smooth and seamless transition. However, heads of the anchor banks have exuded confidence and do not find any problem as the process has gone as per the plan with certain modification in implementation.

The four anchor banks -- PNB, Canara Bank, Union Bank and Indian Bank -- have postponed some part of the implementation and processes due to the lockdown for example like loan process which were proposed to be followed earlier.

In addition, consolidation would also provide impetus to merged entities by increasing their ability to support larger ticket-size lending and have competitive operations by virtue of greater financial capacity.

7th Largest Bank: The merger of Allahabad Bank with Indian Bank has created the seventh largest public sector bank with ₹8.08 lakh crore business having strong branch networks in the south, north and east of the country

India has 12 Banks Now
The biggest overhaul in public sector banks has left India with only 12 banks now instead of 18 before the Merger. According to the Government this decision of making large entities will make the Indian banks capable of meeting the higher funding needs of the economy and will help in acquiring the global scale.

Fruitful Result of Banks’ Merger
As per studies conducted, most of the mergers done in the past, have proved to be an overall success for the weaker banks although there are no concrete parameters to verify this observation. Hence going by the track record merger and acquisition in Indian banking have been fruitful for the Indian Economy.

On March 4, 2020, the Finance Minister announced the final date of merger as April 1, 2020. According to her, the exercise of consolidation of 10 public sector banks (PSB) into four is on course and the merger will come into effect from April 1, 2020. The Union Cabinet has given a go-ahead for the merger

It is but the desire for growth that acts as the fuel not only for an entrepreneur but also for every professional or corporation. This deep desire for growth in terms of customer base, balance sheet and profit has led the organizations engaging in mergers and acquisitions to move ahead and onwards in synergy.

The Indian Banks too did not stay aloof from this wave of mergers and acquisitions (M&A). Initially banks were merged to save non-performing banks or non efficient banks but as time evolved the system too evolved. In the recent times mergers and acquisitions have also been made on grounds of business growth, profitability and organizational restructure.

History of Mergers in Indian Banking
Mergers of banks began in India in the 1960s in order to bail out the weaker banks and protect the customer interests. After that in post liberalization period the quest to create an Indian bank that would be in the league of global giants had been continuing since 1990. Moving on the path of creating one of the largest global banks, the government had approved the merger of five associate banks with SBI in February 2017. Later in March, the Cabinet approved merger of BMB also.

Merger & Nationalization during the period from 1961-1969: The period is called pre-nationalization period because in 1969 the government nationalized 14 private banks. As many as 46 mergers took place mostly of private sector banks in order to revive the poorly performing banks which proved to be quite a successful move for the underperforming banks.

The period from 1969-1991: The period was called post-nationalization period. It saw six private banks being nationalized in 1980. In this period 13 mergers took place mostly between public and private sector banks.

The post liberalization period, which stretches from 1991-2015, saw major economic reforms initiated by Government of India. Many new policies were framed. Greater FDI and foreign investment was allowed which saw resurgence in Indian Banking. As many as 22 mergers took place - some to save weaker banks and some for the sake of synergic business growth.

Bank Mergers (1993-2004): The merger of Oriental Bank of Commerce with Global Trust bank in 2004 saved the latter after its net worth had wiped off and also handed OBC a million depositors and a decent market in South India. Mergers of Punjab National Bank (PNB) with the then eroded New Bank of India (NBI) in 1993-94 and that of Benaras State bank Ltd with Bank of Baroda in 2002 also proved to be life saving for the weaker bank.

Bank Mergers & Consolidation 2008-2010: SBI first merged State Bank of Saurashtra with itself in 2008. Two years later in 2010, State Bank of Indore was merged with it. The board of SBI earlier approved the merger plan under which SBBJ shareholders got 28 shares of SBI (Re.1 each) for every 10 shares (Rs10 each) held. Similarly, SBM and SBT shareholders got 22 shares of SBI for every 10 shares.

Post the merger, the SBI was in the process to rationalize its branch network by relocating some of the branches to maximize reach. This, according to SBI helped the bank optimize its operations and improve profitability. SBI had approved separate schemes of acquisition for State Bank of Patiala and State Bank of Hyderabad. There was no proposal for any share swap or cash outgo as they were wholly-owned by the SBI.

Consolidation of Banks (2015-2017) – This phase saw five associates of SBI and Bhartiya Mahila Bank getting merged in SBI. The vision was to have strong banks rather than having large number of banks. This resulted in SBI being one amongst the 50 largest banks in the world.

Merger of Banks 2018- The government had merged Dena Bank and Vijaya Bank with Bank of Baroda, creating the third-largest bank by loans in the country in 2018.

Mega Merger of Banks 2019- With the mega merger announce on August 30, 2019, ten public sectors banks are now reduced into four large banks. The four sets of banks that have been  created out of Canara Bank and Syndicate Bank merger; Indian Bank and Allahabad Bank merger; Union Bank of India, Andhra Bank and Corporation Bank merger; and the bank to be created after merger of Punjab National Bank, Oriental Bank of Commerce and United Bank of India.

Six Banks Untouched: The mega merger has left untouched six other banks out of which two are national banks and the four have regional focus. The untouched banks are Bank of India, Central Bank of India, Indian Overseas Bank, Uco Bank, Bank of Maharashtra and Punjab & Sind Bank which will continue as separate entities as before.

Rs. 55000 Crore Recapitalization Plan With Mega Merger
The Finance Minister of India has also announced Rs.55,000 Crore recapitalization plan for the banks formed after merger. Besides, recapitalization will also be infused to the six other banks which are not the part of this merger.

Problems Arising due to Mergers & Acquisitions in Indian Banking
Most of the problems arising due to mergers and acquisitions are more emotional and social in nature than technical or managerial. The major problems which arise are:-

Important But to Remain under Watch
Mergers are important for the consolidation and expansion purposes that is why in today’s scenario many private sector banks are genuinely interested in mergers and acquisition. They are also crucial for Economy as they are most of the times successful in saving weak banks which fail in meeting expectations.

Merger creates variety of problems which can cause great damage if the process of merging is not executed properly.

If merging is needed it must be executed in a manner which leads to an environment of trust and agreement among the people of both the organizations. If people, work culture and vision are blended together nicely, merging will definitely have synergic effects and create a win-win situation.