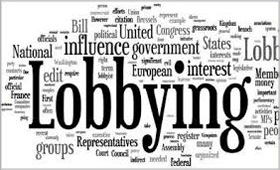 MBAUniverse.com has started a new expert series of GD PI WAT preparation for MBA Admission 2014. This series of articles will help aspirants prepare for their GD PI WAT by providing them valid contents, probable topics and experts advice to help you succeed during admission process at various B schools. This article is based on the GD Topics “Should business lobbying be made legal in India?” to help you provide inputs for your group discussion rounds.

Background
The country is passing through the fierce debates on Business Lobbying. Lobbying in fact are the attempts made by certain Corporate Groups to influence the direction of legislative policy of a country/state in such a manner so as to bring benefits to them and safeguard their interests.

Key Points
The objective of the lobbyist is to achieve the goal of maximizing their interests. It can be done by influencing the legislators, members of Parliament and create a lobby to bring forth and get the legislation passed in favour of the Corporate Group.

Lobbyist may be an individual or a group of individuals working for their employer or as an agent to them.

Such people can be leaders of labour Unions, Corporate representatives, even legislators, bureaucrats, leading advocates exercising influence in legislative circles, or other private interest groups. India does not have any clear regulation for or against lobbying, especially when it comes by the name of lobbying.

Arguments for the topic

When so much of lobbying is done by the registered and legal firms and companies in the guise of some or other name and it is a well known fact, making lobbying legal will add to the government’s income by levying good amount of fee and charges on the same. Where does the amount, being paid now on lobbying, go – is anybody’s guess. A transparent legislation will definitely solve this ambiguity and loss of income.

Concluding remarks -The efforts made so far in India
The Planning Commission has set up an expert group to look into the processes that comprise lobbying. However, given the political exigencies of framing policies and complex nature of polity, this task will require the consummate skills of great statesman.

Lobbying has now become a well established service industry although known by different names like –Public Relations, External Affairs Managers, Environment Management Experts, etc. Various established Associations, Federations, Confederations of Industry and commerce etc. function as lobbyists to get the policies framed in favour of Corporates. Lobbying industry has been placing its demand for clear and transparent laws in countries like India where no clarity on the issue is available. So it is high time that India should decide to make the lobbying either legal or illegal by framing detailed and clear policy.