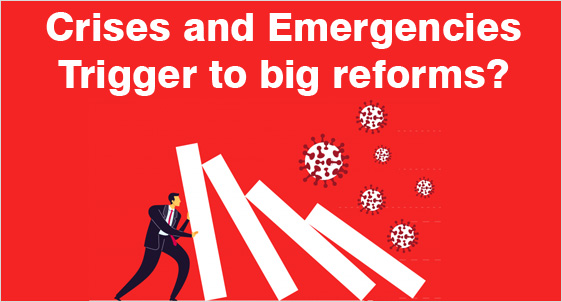 Recent Covid 19 Crisis has led to a lot of despair across the world. Millions have lost their family members and a lot more are facing economic challenges due to loss of business and the economic recession. Indeed, Humanity has never seen such global devastation since World War II.

But, is there a bright side to the crisis? Is there a silver lining in the dark clouds? Some humanists and analysts certainly seem to think so.

In the midst of every crisis, lies great opportunity - Albert Einstein

MBAUniverse.com reviewed past crisis and emergencies to understand if these are triggers for big reforms. Crises and Emergencies – Trigger to big reforms? is a hot GD WAT PI Topic for MBA Admissions and other entrance exam process. So, read on for this exclusive GD Topic by MBAUniverse.com. We look at key crisis that led to reforms across the globe and in India.

Global Crisis and Emergencies that lead to big Reforms
You will be surprised to read the list of Global Crisis and Emergencies that lead to big Reforms in France, US and Europe in the last 300 years. Check list below. For instance, the French Revolution in 1789-99 lead to the end of monarchy in France which lead to the Renaissance period that led to boom of art and commerce in France. Similarly, in the US, the Civil Wars in the US lead to end of Slavery. Another great example is of Japan which was crushed in World War II but it rose from the ashes and moved rapidly towards industrialization in 1950s.

Table 1: Global Crisis and Emergencies that lead to big reforms

India has been no different…
Crisis has led to big reforms in India too. Biggest example is the sweeping Liberalization and Privatization of 1991 that we a result of balance of payment crisis! In 1991, India met with an economic crisis relating to its external debt — the government was not able to make repayments on its borrowings from abroad; foreign exchange reserves, which we generally maintain to import petrol and other important items, dropped to levels that were not sufficient for even a fortnight. The crisis was further compounded by rising prices of essential goods. All these led the government to introduce a new set of policy measures which changed the direction of our developmental strategies. Earlier, the Food and Milk Shortage of 1960s led to the Green and White Revolution, where India become the biggest milk producer in the world!

Table 2: Crisis and Emergencies in India that lead to big reforms

4. Push towards Privatization of CPSEs

So has India turned the COVID 19 Crisis into an opportunity for reforms? From above facts, it appears that India has done well, although a lot of Land and Labour reforms are pending.

Given the importance of the above developments, this is a hot topic for GD PI WAT for IIMs and other top B-schools and other entrance exams. So, keep yourself updated.