Crypto Currency: A bright future or just a fad? 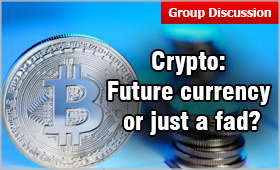 Latest Update: On March 4, 2020, The Supreme Court of India quashed the ban levied on the trading of the cryptocurrency in India. The decision overruled the 2018’s RBI ban imposed on virtual currencies like Bitcoins. The aim of the ban was to safeguard the country’s financial system from the private virtual currencies, which are deemed illegal by the government.

Cryptocurrencies are the digital currencies that uses encryption techniques to regulate the generation of units of currency and verify the transfer of funds, operating independently of a central bank.

Over the years, bitcoin, as a cryptocurrency has been unstable leading to investors pulling away from investing in the same. After depreciating by up to 70% last year, the same has appreciated by almost half so far this year, to regain the $10,000 mark against the US dollar.

A crypto currency is a digital or virtual currency that uses cryptography to secure, create and control its transactions. Unlike traditional currencies, which are issued by central banks, crypto currency has no central monetary authority. Bitcoin is the first crypto currency which came to public notice in 2009. Following this a number of other crypto currencies, such as Ethereum, Ripple, Litecoin, Cardano etc. exist in the market. Crypto currency can be exchanged for other currencies, products, and services. In recent months, Economists, Central Bankers and Monetary Experts have expressed their reservations on the future of this currency. Investors and Enthusiasts of this currency are however bullish.

Key facts and figures:
According to “Global Crypto Currency Benchmarking Study” conducted by Judge Business School, University of Cambridge, these are key facts about the size and usage of this currency:

How does a Crypto Currency work?

The technology behind Crypto functioning is Blockchain. A blockchain is a public ledger that keeps records of all prior bitcoin transactions. These data units or blocks use cryptographic validation to link themselves together. The entire network is used to monitor and verify both the creation of native tokens through mining, and the transfer of tokens/coins between users.

Miners are individuals or organizations who, with the use of powerful computers carry out mining process. Mining is the process by which transactions are verified and added to the public ledger, block chain, and also the means through which new coin are released. The mining process involves compilation of recent transactions into blocks and finding solution of a computationally difficult puzzle. The successful miners who solve the puzzle get to place the next block on the block chain and are rewarded. The reward is twofold. The newly minted tokens/coins and the fees paid by users sending transactions are rewarded to the miners for their efforts.

The above discussed topic is one of the most talked about issue and has been carefully chosen and solved with the sole aim to help you succeed in GD round. If you follow a few key tips, you can improve your participation and scores on this GD topic and others: