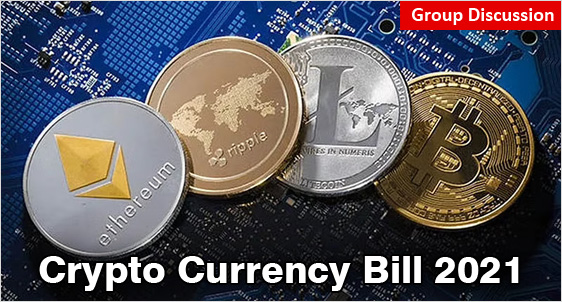 With Bitcoin and other popular crypto currencies booming, Indian Government is planning legislation that would create the ground for the introduction of an official digital currency and prohibit private cryptocurrencies. A bill for this is likely to be introduced in the ongoing session of parliament. As per Lok Sabha Bulletin Part II, The Crypto-currency and Regulation of Official Digital Currency Bill, 2021 will be introduced by the Government of India to ban trading and investments in private crypto-currencies such as Bitcoin during the Budget session of the Parliament and will provide the Reserve Bank of India (RBI) with the legal powers to develop Central Bank Digital Currency (CBDC).

Sources in the Government said the legislation draws extensively from the recommendations of the SC Garg Committee which was set up by the Government to provide a detailed overview and way forward on cryptocurrencies. The key recommendation of the Garg committee covered the banning of private currencies and introducing an official digital currency.

Given the importance of the development, Cryptocurrency and Regulation of Official Digital Currency Bill is expected to be a hot topic for MBA GD PI WAT 2021. Read this detailed article by MBAUniverse.com to prepare yourself.

The purpose of theCryptocurrency and Regulation of Official Digital Currency Bill, 2021 has been described as:

What is Central Bank Digital Currency (CBDC):
Digital currencies or cryptocurrencies are gaining popularity across the world. This has made most central banks look at launching a digital currency controlled by them to address their shortcomings while hastening the shift towards a cashless society.

The Reserve Bank of India (RBI) stated that the innovations have been rapidly changing the payments space and this has made central banks across the world examine whether they could leverage on the technology and issue fiat money in the digital form or not. Recently, RBI indicated that it is conducting a feasibility study on the development of a government-backed digital currency.

Need for CBDCs in India:
Does India really need CBDCs? In May 2020, China started testing its Digital Yuan-- Digital Renminbi (RMB). Several other nations have also started research and pilot projects related to CBDC such as Canada, USA and Singapore. Also, China and USA are battling to gain the supremacy across markets with the introduction of new-age financial products and India may get caught up in this digital proxy war.