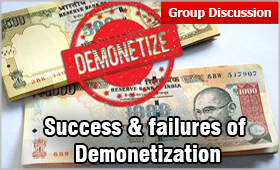 Demonetization: Still Haunts Indian Economy
The Demonetization was announced as a surprise in the night on November 8, 2016.  The Economic Survey of India which was released just before the presentation of General Budget 2018 in Parliament emphasized that all the negative impact of Demonetization of Rs.500/- and Rs.1000/- currency notes has ended. However, the analysis in India and abroad has claimed that demonetization of November 2016 has failed to do what it was supposed to do and its impact has turned out to be more protracted than initially expected.

Experts think that even from the point of view of promoting digital money, there was no need for the government to have put 86 per cent of all currency out of circulation. Studies have pointed out that very little black money was caught. On August 30, 2017, the Reserve Bank of India released its report on Demonetisation. The report said 99 per cent of the banned notes came back into the banking system. This belies the Government claims that the Demonetization would flush out the black money and counterfeit currency. Claiming the Demonetization as a wrong decision, as 99 per cent currency is back in the system, it points to one of the two things -

Demonetization: Positive Impacts on Indian Economy Claimed
Economic Survey after careful review of Demonetization which was announced one and a half year back, has found that the cash-to-GDP ratio has stabilized. It suggests a return to equilibrium:

Demonetization: Back ground and key facts

The announcement was sudden and unscheduled. It was a live television address at 8PM on November 8, 2016.  In the days following the demonetisation, the country faced severe cash shortages with severe detrimental effects across the economy. People seeking to exchange their bank notes had to stand in lengthy queues, and several deaths were linked to the inconveniences caused due to the rush to exchange cash. As the cash shortages grew in the weeks following the move, the demonetization was heavily criticised by prominent economists and by world media.

Demerits-Blow to economic growth and inconvenience all around
The very next day of announcing the demonetization, the BSE Sensex and NIFTY 50 stock indices fell over 6%. The severe cash shortages brought detrimental impact on the economy. People trying to exchange their bank notes had to stand in lengthy queues causing many deaths due to inconvenience and rush.

Demonetisation: Success points
India has marched on the path of digital transactions at a much faster pace. Key points describing success of demonetisation are:

Rate of Inflation goes down
Prices of commonly consumed commodities like Pulses, fruits, vegetables had gone down substantially post demonetization. Accordingly it brought down the rate of inflation during the months that followed demonetization. The chart below represents the impact of demonization on the commodities 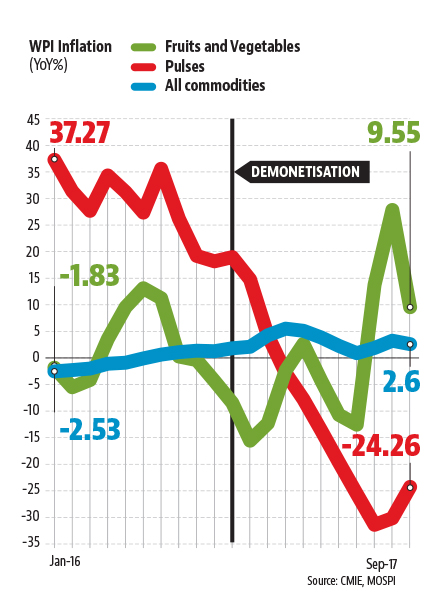 India moves to cashless economy
One of the key effects of Demonetization 2016 has been that more people have made digital payments part of their lives moving towards a cashless economy. The details of growth of such digital transactions since January 2016 to August 2017 reflect that NEFT transactions that involved Rs. 7086 bn increased to Rs.12500 bn; Debit cards transactions increased from Rs.2328 bn to Rs. 2700 bn; credit cards from Rs. 214 bn to Rs.366bn and the IMPS transaction which was not used by the people, got a share of Rs.651 bn. The Data shared by Reserve Bank of India reflect the trend: 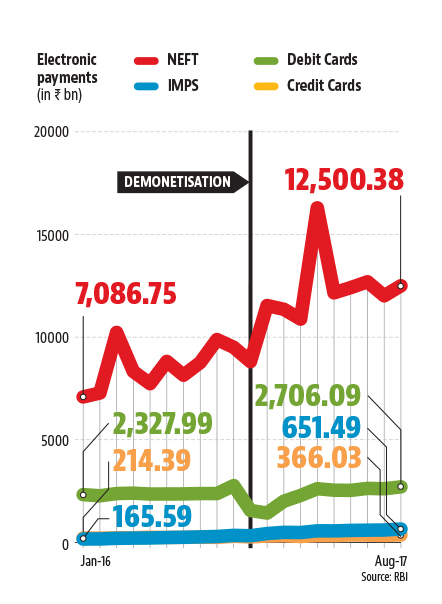 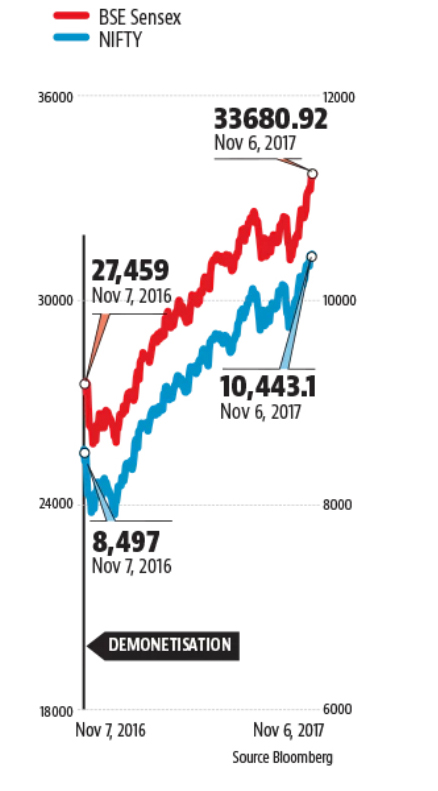 Automobile sales picked up
Sale of 2 wheelers and 4 wheelers was showing a negative growth in 2016. In 2017 it went up substantially and recovered from the impact of negative growth to high positive growth as reflected in the report. 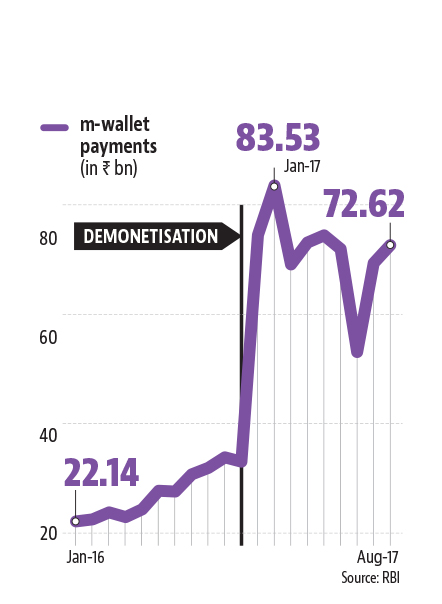 Economic Growth slows down
Post demonetization growth of Indian Economy slowed down from 9.1% to 5.7% in less than one year. Month-wise GDP growth chart for the period March 2016 to September 2017 as shared by Bloomberg emphasizes this fact as detailed below: 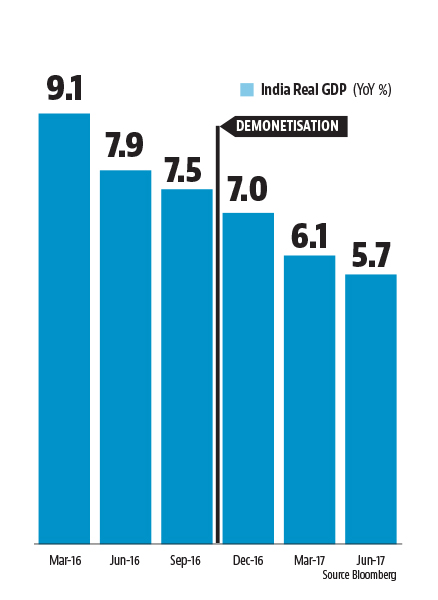 Realty sector bears the brunt
The triple decisions of demonetisation, RERA and GST resulted in a deceleration of new property launches. The supply of new housing units in the top-6 cities in India during the first three quarters of 2017 was down by around 60 per cent, compared with the corresponding period of 2016.

With respect to property sales, the secondary market was obviously highly susceptible to demonetisation as compared to the primary market. Property transactions in the secondary sales and luxury housing segments tended to have significant cash components, and such sales have been hampered significantly due to demonetization.

However, the shadow of Demonetization now appears to be fading in reality sector. The prevailing attractive home loan rates, flexible payment plans and other attractive offers by developers, coupled with restricted new supply addition, has led to a steady decline in the unsold inventory.

Initiatives such as interest waivers on home loans, the government’s push for affordable housing through Pradhan Mantri Awas Yojana (PMAY) and the ‘Housing for all by 2022’ mission have come to the forefront over the past one year. Various policy initiatives, amendments and reforms were all aimed at making the real estate sector more transparent, organised and fundamentally stronger. Demonetisation played a significant role in this process.

In the long term, the real estate sector is likely to regain a faster growth trajectory and is estimated to contribute around 13 per cent to India’s gross domestic product by 2028. This optimistic forecast is very much attainable because the various reforms now redefining the realty landscape in India will not only incrementally boost consumer sentiment but also improve investment inflows from foreign and domestic institutional investors.

The Finance Minister Arun Jaitley on November 7, 2017 came out with a spirited defence of demonetisation announcement on November 8, 2016 calling it a “watershed moment for the Indian economy”. According to him the demonetization has not only changed the agenda but also made corruption difficult. Thus, in his opinion, it was not only a “morally and ethically correct” step but also “politically correct”.

Which way to go?
You may get not more than 1 minute while speaking for or against or taking a balanced view on demonetization and its impact on economy. The only thing is that you should be well aware about the topic and only this can lead you to speak the way you think is right. Besides, once someone else is speaking you may carefully listen to him and later try to get in and speak out your view point. Please remember do not criss-cross your own stand.