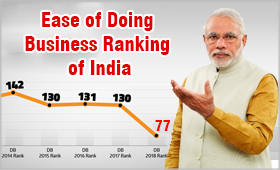 India climbed 14 Ranks in the World Bank’s Ease of Doing Business 2020 survey to stand at 63, among 190 countries, making it the one of world’s top 10 most improved countries for the third consecutive time. Last year, India jumped 23 places to reach 77th position. These rankings were announced in October 2019. Improvement in World Bank’s Ease of Doing Business Ranking point to the reformist credentials of the Narendra Modi-led National Democratic Alliance (NDA) government that has implemented many big reforms like GST and Insolvency and Bankruptcy Code. But some critics opine that Rankings may not present a true picture of real economy.

But do Rankings really reflect on-ground Improvement?
Doing Business Ranking Survey by the World Bank is termed as a controversial study by critics. It may not reflect the true picture of Ease of Doing Business. Let’s understand more.

General Tips to improve your participation in GD round
This topic in GD round is one of the hot probable topics and has been carefully chosen and solved with the sole aim to help you succeed in GD round. If you follow the few key tips, you can improve your chances to get through the GD round