Farm Bills 2020: Will it Break the Glass Ceiling? 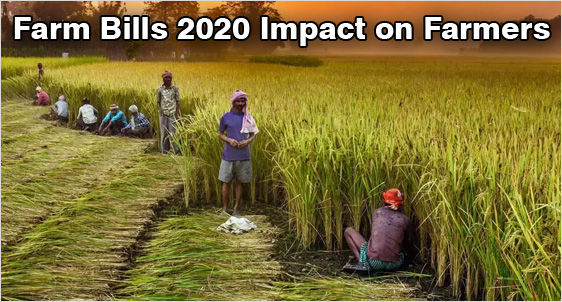 Prime Minister Narendra Modi on Friday (November 19) announced the repeal of the three contentious farm laws. Farmers, mostly from Punjab and Haryana, have been protesting against these laws at the borders of Delhi since November 26 last year. The implementation of these laws was stayed by the Supreme Court on January 12, 2021. So, these laws were in effect for only 221 days.

While no official reason has been cited, the decision comes just ahead of the Winter Session of Parliament that is scheduled to commence on November 29.

The three Farm Bills 2020 which were earlier passed by both houses of Parliament, got the assent by President of India on Sunday, September 27, 2020. The Farm bills 2020 include three bills; Farmers' Produce Trade and Commerce (Promotion and Facilitation) Bill, Farmers (Empowerment and Protection) Agreement on Price Assurance and Farm Services Bill and Essential Commodities (Amendment) Bill. With the President’s nod, all the three Farm bills 2020 have become Act with the aim to bring about more agriculture reforms and to give benefit to the farmers in getting best market price for their produce.

Since this issue impacts the largest sector of Economy in India-Agriculture, it is a hot GD topic for MBA, BBA and other competitive entrance exams. MBAUniverse.com editorial team has prepared the highlights, Pros and Cons of this topic for your easy reference.

The Farm bills 2020 reflect a big structural change attempted by Modi government with the vision to encourage corporate investments in agricultural ecosystem to make it lucrative for farmers.

What are the three Farm Bills & What they Aim:
Following three bills which are included in the Farm Bill 2020, have different implications. All these bills have now become Act.

However, the political parties in opposition are opposing these Farm bills and find them detrimental to the interests of farmers. As such they are organizing demonstrations and rallies against the farm bill across the country. On the other hand, Agriculture Minister Narendra Singh Tomar said the bills are not going to override the Minimum Support Price mechanism, and adequate protection of land ownership was in place to protect farmer interests.

The Background: Farmers’ Problems & the Vision to Eliminate them
In the existing system farmers have been facing several problems. These problems include overproduction, low crop prices, high transportation costs, high-interest rates, and growing debt. The other major issue with the existing Minimum Support Price (MSP) based procurement system is the dependence on middlemen, commission agents, and red-tapism of the Agriculture Produce Marketing Committee (APMC) officials. An average farmer finds it difficult to get access to these mandis and depends on the market to sell farm produce.

In February 2016, the Prime Minister of India, Shri Narendra Modi shared a vision of doubling farmers’ income by 2022 when India celebrates the 75th year of its Independence and the 150th birth anniversary of Mahatma Gandhi. To the Mahatma, true independence meant wiping every tear from the face of every Indian. With 48% of India’s population dependent on agriculture for its livelihood, the welfare of Farmers assumes great sensitivity.

The newly passed farm bills will give farmers the freedom to trade across states and empower them to turn into traders of their own produce and be in control of the process. The intent behind these three bills is that the new regulation will create an ecosystem where the farmers and traders will enjoy the freedom of choice of sale and purchase of Agri-produce and promote barrier-free inter and intra-state trade and commerce outside the physical premises of markets notified under State Agricultural Produce Marketing legislations.

Intention of Government
The government has said that these reforms will accelerate growth in the sector through private sector investment in building infrastructure and supply chains for farm produce in national and global markets.  They are intended to help small farmers who don’t have means to either bargain for their produce to get a better price or invest in technology to improve the productivity of farms.

The bill on Agri market seeks to allow farmers to sell their produce outside APMC 'mandis' to whoever they want.  Farmers will get better prices through competition and cost-cutting on transportation.

The legislation on contract farming will allow farmers to enter into a contract with agri-business firms or large retailers on pre-agreed prices of their produce.

The Essential Commodities (Amendment) Bill, 2020, seeks to remove commodities like cereals, pulses, oilseeds, edible oils, onion and potatoes from the list of essential commodities. This will end the imposition of stock-holding limits.

What will not happen

Why the Farm Bills 2020 are Opposed? Cons
Political parties, some state governments taking farmers and farmer associations along, are protesting against the farm bills passed by the Parliament. The key points on which these Farm Bills are opposed include:

Encroachment on States’ Functioning Area
The Farm Bills are seen as a direct encroachment upon the functions of the States and against the spirit of cooperative federalism enshrined in the Constitution as the agriculture and markets are State subjects as provided for at  entry 14 and 28 respectively in List II. The Central Government  has argued that trade and commerce in food items is part of the concurrent list, thus giving it constitutional propriety.

States to Suffer Revenue Loss
The bill prohibits State governments from collecting market fee, cess or levy for trade outside the APMC markets incurring loss of revenue for the State Governments.

Exploitation in the Name of Agreement
The Farmers (Empowerment and Protection) Agreement of Price Assurance and Farm Services Ordinance requires the farmers to enter written farming agreement, prior to the production or rearing of any farm produce and lists the terms and conditions for supply, quality, grade, standards and price of farm produce and services. The price to be paid for the purchase is to be mentioned in the agreement. In case of prices subjected to variations, the agreement must include a guaranteed price to be paid for such produce, and a clear reference – linked to the prevailing prices or any other suitable benchmark prices – for any additional amount over and above the guaranteed price, including bonus or premium. The method of determining such price, including guaranteed price and additional amount, will be provided in the agreement as annexures.

The Price Assurance Bill, while offering protection to farmers against price exploitation, does not prescribe the mechanism for price fixation. There is apprehension that the free hand given to private corporate houses could lead to farmer exploitation.

Critics are apprehensive about formal contractual obligations in Contract Farming, owing to the unorganised nature of the farm sector and lack of resources for a legal battle with private corporate entities.

Giving Way to Stock Hoarding
The Essential Commodities (Amendment) Ordinance removes cereals, pulses, oilseeds, edible oils, onion and potatoes from the list of essential commodities. The amendment will deregulate the production, storage, movement and distribution of these food commodities. The central government is allowed regulation of supply during war, famine, extraordinary price rise and natural calamity, while providing exemptions for exporters and processors at such times as well. The Act requires that imposition of any stock limit on agricultural produce must be based on price rise. A stock limit may be imposed only if there is a 100% increase in retail price of horticultural produce; and a 50% increase in the retail price of non-perishable agricultural food items.

This in view of critics, would lead to exporters, processors and traders hoarding farm produce during the harvest season, when prices are generally lower, and releasing it later when prices increase. It could undermine food security since the States would have no information about the availability of stocks within the State. Critics anticipate irrational volatility in the prices of essentials and increased black marketing.

No Law to Implement MSP
The government declares MSPs for crops, but there has been no law mandating their implementation.

The Farmers’ Produce Trade and Commerce (Promotion and Facilitation) Bill does not give any statutory backing to MSP. The farmers have nothing to do with the legal system but everything to do with the MSP, a price at which they sell their produce, there is not even a mention of either “MSP” or “Procurement” in the said bill.

The only crop where MSP payment has some statutory implementation is sugarcane for which FRP is determined. This is due to its pricing being governed by the Sugarcane (Control) Order, 1966 issued under the Essential Commodities Act.

Farmers & Traders at the Mercy of Govt. Officials
The new bills are placing farmers and traders at the mercy of civil servants, rather than of the courts.

Over 500 farmer unions have started protesting against the recently passed Farms Act and are demanding that the Government should repeal all the three Acts. Transport unions representing over 14 million truckers, bus drivers and taxi drivers have also come out in support of the farmers, threatening to halt movement of supplies in certain states. Inspite of all the assurances by the Government that interests of the farmers are fully protected in the Acts which aim to enhance the farmers' income, Farmers continue agitating and have blocked the Delhi entry borders.  After the government - farmers talks on December 4, 2020, the farmers planned to escalate the action to another India-wide strike on 8 December 2020 and called for 'Bharat Bandh'. From December 12, farmers sieged the toll plazas and allowed free movement of vehicles that has incurred a loss of  Rs.150 crores so far.

While many Farmer Unions describe the Acts as "Anti-Farmer Laws", others like parts of BKU, have threatened to start demonstrations, in case Farms Acts are repealed by the Government. The government maintains that they will make it effortless for farmers to sell their produce directly to big buyers.

Soon after the Farm Acts were passed, Farmer unions in Punjab began holding local protests and after two months of protests, farmers from Punjab, Rajasthan, Haryana, began a movement 'Dilli Chalo'. Tens of thousands of farmers marched towards the nation's capital. Police and law enforcement used water cannons and tear gas to prevent the farmers from entering Delhi. On November 26, Nation wide General Strike involving 250 million people took place in support of the farmers according to the trade unions that organised the protests.

So, What should Government do Now!
Giving farmers the choice to sell without the help of middlemen could prove to be fruitful, only if there are roads that link villages to markets, climate-controlled storage facilities, the electricity supply is made reliable and available to power those facilities, and food processing companies who compete to buy their produce.

After mass protests by farmers in Punjab against the Farm Bill provisions, a special session of the Punjab Assembly on Tuesday (October 20) not only rejected the laws by a unanimous resolution but also passed three farm amendment Bills removing the state from the purview of the central laws.

According to Punjab Government this is being done to “restore the agricultural safeguards for the farmers through the regulatory framework of Punjab Agricultural Produce Markets Act, 1961 to secure and protect the interests and livelihoods of farmers and farm labourers as also all others engaged in agriculture and related activities”.

The amendments by Punjab Government has received a mixed response. Dr S S Johl, former Vice Chancellor of Punjab Agricultural University and expert on agriculture economics said the state Bill is a part of “vote-bank politics”, and a bid to block private players from the state. Legal experts also point that state governments cannot thwart central legislations in this manner. Coming weeks and months will see more clarity on this issue.