Gig Economy: Statistics, Why is it growing, Pros & Cons, Impact of Covid 19 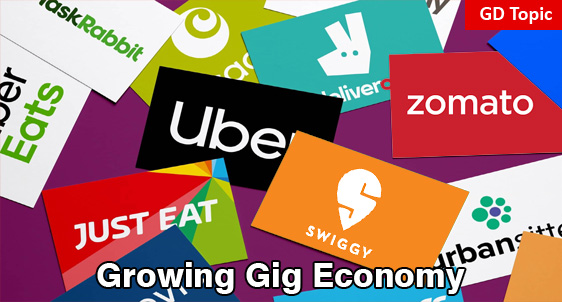 Gig Economy, also referred to as “crowdsourcing”, the “sharing economy” and the “collaborative economy”, is where the individuals can market their skill sets (in both unskilled labour market and as skilled professionals) and sell their services online on different platforms or companies. In this GD Topic by MBAUniverse.com read all about Gig Economy Statistics, understand reasons for its massive rise, Pros and Cons, and Impact of Covid 19.

With the downsizing trends of talented professionals, the rise of the digital age where the workforce is increasingly becoming mobile and can work from anywhere, and the effect of globalization to create more opportunities, the Gig economy is gaining significant attention in the current generation of the professionals. Today’s economy has created opportunities in the global marketplace for contractors working independently to expand their customers both nationally and internationally and for the businesses to tap the global market beyond the local marketplace to utilize required professional services. With the Gig economy more efficient services are provided at a cheaper rate, for e.g.: Uber or Airbnb.

Examples of the Gig economy

As quoted in the Randstad, and also based on the leading newspaper, ‘The New Yorker’, the gig economy is very much prevalent in many organizations, especially in these techno-savvy times. These companies, such as, Upwork, Thumbtack, 99 Designs, Airtasker, etc. are all based on the system of ratings and secure payment systems routed through online web applications.

In this era of the modern technology of internet and concepts like big data, the push towards gig economy has never felt greater. With just a proper running internet connection, transactions of buying and selling can happen online. The following cloud-based platforms, either in the form of websites or apps or both, have brought together the independent worker and the prospective business client:

Examples of a Gig economy applications:

As is widely accepted, such platforms behave as any provider’s personal brand image, and also his professional mark of identity. Good jobs and services are rewarded heavily, through good reviews from customers, and hence increased ratings of the worker on the platform.

According to some HR experts, the word “Gig” was first used by Jazz musicians which meant Job, in 1915. The first temp agency was opened in the year 1940, which provided jobs to typists and other clerically trained staff on a temporary basis. Gig economy started to take off in in the late 90s and early 90s along with the digital era. During the 1990s, 10% of the US workforce was employed as contractors, temps and on-call workers, as the demand for more flexible work patterns and non-permanent staff intensified. In the year 1995 Craigslist was introduced, which provided local San Francisco-based online classifieds different jobs, items wanted and for sale, gigs, services, resumes, housing, and more. This was followed by the launch of Upwork in 1999, which allowed freelancers to use the internet to find new projects and clients. Gig economy gained significance around 2008 when the Great Recession hit due to which people had less secure and limited location-based work, and found themselves unable to find stable work.

How does the Gig work?

It consists of tasks (anything like delivering a lecture, housekeeping service or working on software development) that the worker completes. Person can opt to work for specified hours or on a project basis. Once either of these is completed, he moves onto the next gig. When workers tend to work on a variety of tasks or different shifts for various clients or companies, their aggregate earnings may resemble that of full-time employment.

In the Gig Economy, the company is not the employer of the worker rather a connector between the contractors and the clients. The gig economy mostly operates on technology platforms that aim to connect workers looking for flexible work arrangements with the companies who need them in a centralized location, such as an app or website. However, Gig economy workers can also work for more traditional companies, which have changed how their staffing system operates.

Why is the Gig economy growing?

A number of reasons contribute to the growth of the Gig economy. The workers seem to prefer freelancing over full-time employment due to its the flexibility and independence. It has created better opportunities of finding more work across the globe and made work more adaptable to the changing needs and demands for flexible lifestyles. With Gig, freelancers can make lifestyle choices that a conventional job would not allow. They can choose when and where to work and at the same time determine how much they will charge for their services.

Companies are benefitting from having a flexible workforce; they are spending less money on training or recruitment, need not pay for any medical coverage, and can more easily replace their workforce if needed. Contracted workers are more cost-effective for businesses and employers are benefitted with a wider range of applicant pool to choose from, also, they don’t necessarily need to hire one based on one’s proximity.

India has emerged as the 5th largest country for flexi-staffing after US, China, Brazil and Japan. India ranks 7th in the talent pool of graduates in science and engineering. Further, India is witnessing a rise in the need for supplemental income due to high unemployment amongst the urban youth, increasing cost of living, growing aspirations of students and changing mindsets of women engaged in homemaking.

Here are career categories that hire for freelance and gig economy jobs that you can do remotely.

The Pros and Cons of Gig Work

Like any job, there are pros and cons to participating in the gig economy.

Also, permanent staff selection procedures are much more time and resource consuming. The digital app based platforms can easily be used to hire experts for all kinds of jobs as and when required, even without geographical constraints. These kinds of features, especially come into use for jobs where work-from-home can be used as an added feature. This may be advantageous, especially in critical pandemic times like these when the entire world is plagued with COVID-19. This improved any firm’s agility and better responsiveness to the market’s rather unpredictable scenarios.

2. Inconsistent Income: With most gig jobs, you’re paid by the project or task. The problem is, you may not have control over how many tasks you’re able to complete in a day or a week. If no one wants a ride, needs something assembled, or wants you to deliver something, you won’t make any money.

3. Burnout: Working multiple jobs or at odd hours isn’t for everybody. Some people find that as flexible as the work is, gig work becomes tiring and stressful after a while.

4. Loneliness: As they say, habits go away slow. Even the random complaint from a boss or a colleague is sometimes missed by the lonely individual worker, in a gig economy. This may especially be true for the ones with issues such as long distances or even long working hours to contend with, like the delivery personnel or drivers.

Also, people involved in writing, editing, designing or web development or similar desk jobs, may start to have limited access to real life human interactions. Though, as their number increases, so will the number of co-work spaces increase eventually. It’s places like these which can then be utilised for trying to lessen the loneliness wherever possible.

5. Need for more discipline and resilience: Individual workers in a gig economy may enjoy a lot of freedom, but this freedom may also create a sense of indiscipline sometimes. As they say, with great power comes great responsibility, so the workers shall have to show even more grit to complete projects on time, assure the clients of quality delivery, while also showing more resilience to probable rejections, or even greater scrutiny from the clients.

Impact of COVID-19 on Gig Economy

With all major economies going into recession and slowdown, COVID 19 has greatly hit the job market. However, in case of gig workers some are struggling to find work while others are seeing job opportunities increase. Delivery drivers or those who pick up food orders for online platforms such as Big Basket and Zomato have seen demand skyrocket as consumers obeying calls for quarantining have ordered food and supplies to their homes rather than venturing to physical stores.

A challenge that gig-economy workers may face is that they are typically not registered with government and regulatory agencies, making it difficult to ensure that government help will reach them.

Global forces will continue to make the gig economy relevant. If individuals and organizations want to consider proactive strategies to beat the global competition, they cannot afford to ignore the freelance workforce. In fact, the gig economy has succeeded to gain momentum internationally to be a critical factor in the very near future.

The defining characteristic of gig economy businesses is that they offer online applications to connect individuals seeking services with those providing services, and do not consider themselves to be service providers. These offerings can themselves can be entirely online or offline