Globalization: An Opportunity or a Threat? 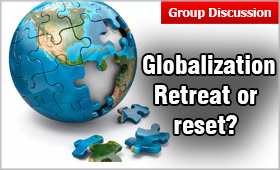 According to International Monetary Fund, Globalization refers to the increasing integration of economies around the world, particularly through trade and financial flows. The term sometimes also refers to the movement of people (labor) and knowledge (technology) across international borders. In addition, there are also broader cultural, political and environmental dimensions of globalization.

Further, environmental challenges such as climate change, global warming, cross-boundary water, air pollution, and over-fishing of the ocean are also linked with globalization.

Globalization as an Opportunity

The above discussed topic is one of the latest topics that has appeared in GD rounds at various top B-schools and as WAT topic also in slightly different form. One needs to understand about the topic before speaking because it is no more a Globalization in its conventional form but is to be taken up in current global scenario. The topic has been carefully chosen and solved with the sole aim to help you succeed in GD round. If you follow the few key tips, you can improve your chances to get through the GD round.