Impact of Technology on Jobs: Will Automation & Artificial Intelligence reduce or increase Jobs? 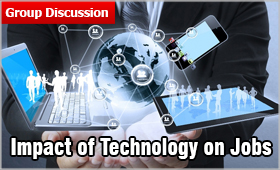 Buzzwords such as Industry 4.0, Artificial Intelligence, Automation, Machine Learning etc. are buzzing around industries and across geographies for some time. While these technological advancements promise a surreal future, prediction of loss of jobs due to human replacement is also expected. Proponents of technological advancements argue that while technology will replace semi and unskilled jobs but in turn it will herald a new era of innovative jobs. Being a Business Management aspirant, the talk of future and futuristic jobs becomes an important subject. Hence, this is a burning topic which is likely to be a part of group discussions of B-Schools.

Technology intervention is inevitable in any sphere. It does raise the bar of productivity, efficiency and safety to a level which is not achievable by humans. Adoption of technology, global reach and faster communication has overhauled manufacturing, servicing, product delivery and also employment associated with these sectors. But, this is not the first time the world has experienced significant shifts in employment due to new technology.History states that technology has been a creator of jobs and has augmented new avenues. The course this time will be same or not is a debatable issue. The prominent technologies that are likely to bring disruption are:

Autonomous and near-autonomous vehicles: Vehicles that can navigate and operate with reduced or no human intervention. These vehiclesare becoming a concrete reality and may pave the way for future systems where computers take over the art of driving.

3D printing: 3D printing or additive manufacturing is a process of making three dimensional solid objects from a digital file.

Industrial Automation: Industrialautomationcan be defined as the use ofset technologies and automatic control devices that results the automatic operation and control of industrial processes without significant human intervention and achieving superior performance than manual control.

Next-generation genomics: The massively parallel sequencing technology known as next-generation sequencing (NGS) has revolutionized the biological sciences. With its ultra-high throughput, scalability, and speed, NGS enables researchers to perform a wide variety of applications and study biological systems at a level never before possible.

Advanced materials: - Materials that are designed to have superior characteristics such as strength, weight, conductivity or functionality.

Arguments supporting that technologicaladvancements will lead to Job loss

Arguments that Jobs will not be lost due totechnological advancements

Enabling more people to harness the benefits from technological advancements is in the best interest of any business or country. Continuous investment in technology without considering the impact on existing workforce could result in a host of other problems. For a smooth transition from current skepticism towards new technology to skilled workforce initiatives like improved retraining for workers who have lost their jobs to automation, and increased financial protections for those seeking new careers, are the recommended steps.

The above discussed topic is one of the latest topics that has appeared in GD rounds at various top B-schools and as WAT topic also in slightly different form. One needs to understand about the topic before speaking because it is no more a Globalization in its conventional form but is to be taken up in current global scenario. The topic has been carefully chosen and solved with the sole aim to help you succeed in GD round. If you follow the few key tips, you can improve your chances to get through the GD round.