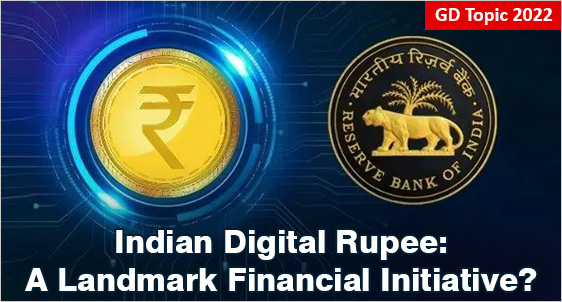 Reserve Bank of India’s maiden test of its central bank digital currency (CBDC), being used for secondary market trades in government securities (G-secs) went off smoothly on November 1, with 48 trades being carried out for a total of Rs 275 crore. According to media reports, the first deal was struck between the country’s largest bank State Bank of India (SBI) and another state-owned lender Bank of Baroda (BoB). SBI was said to have sold securities to BoB using CBDC. ICICI Bank also sold the five-year government paper to IDFC First Bank. Bank officials described the pilot as a ‘landmark moment’ and said the testing went off smoothly. The pilot was tested out between nine banks -- SBI, BoB, Union Bank of India, HDFC Bank, ICICI Bank, Kotak Mahindra Bank, YES Bank, IDFC First Bank, and HSBC.

Confirming the development, Reserve Bank of India Governor Shaktikanta Das called launch of central bank digital currency is a landmark achievement. “Yesterday, we launched the trial of Central Bank Digital Currency (CBDC) project... It'll be a landmark achievement as far as the functioning of the entire economy is concerned. Reserve Bank is among the very few central banks in the world which have taken this initiative”, the governor said.

Launch of Digital Rupee in India was a key announcement that Finance Minister Nirmala Sitharaman made in her Budget 2022 speech. This became a reality on November 1, 2022. Given the importance, the RBI launch of Central Bank Digital Currency in India becomes an important GD Topic for MBA Admissions. Let’s understand the key points and be ready to effectively discuss this GD Topic on RBI to issue Central Bank Digital Currency in India.

What is Digital Rupee?
A Central Bank Digital Currency (CBDC) or Digital Rupee is a digital form of currency notes issued by a central bank. Digital currency or rupee is an electronic form of money, that can be used in contactless transactions. CBDC can be classified into two types

Difference between digital rupee and cryptocurrency

So, though the concept of Central Bank Digital Currency (CBDCs) was inspired by Bitcoin, it is different from decentralised virtual currencies, which are not issued by the government and lack the ‘legal tender’ status.

Checking Malpractices: The need for a sovereign digital currency arises from the anarchic design of existing Cryptocurrencies, wherein their creation, as well as maintenance, are in the hands of the general public. By regulating digital currency in India directly, the central bank can put a check on their malpractices.

Addressing Volatility: As the cryptocurrencies are not pegged to any asset or currency, its value is solely determined by speculation (demand and supply). Due to this, there has been huge volatility in the value of cryptocurrencies like bitcoin. CBDCs are expected to be more stable.

Check Digital Currency Proxy War: India runs the risk of being caught up in the whirlwind of a proxy digital currency war as the US and China fight to gain supremacy. A sovereign Digital Rupee is a need to push back against the proxy war which can threaten our national and financial security.

Reducing Dollar Dependency: Digital Rupee provides an opportunity for India to establish the dominance of Digital Rupee as a superior currency for trade with its strategic partners, thereby reducing dependency on the dollar.

Reduce Currency Cost: CBDC can reduce the cost of currency management while enabling real-time payments without any inter-bank settlement.

Reduce dependence on Cash: India’s fairly high currency-to-GDP ratio holds out another benefit of CBDC to the extent large cash usage can be replaced by (CBDC), the cost of printing, transporting and storing paper currency can be substantially reduced.

Concerns & Issues: However financial experts point out to some concerns too. Some key issues include the scope of CBDCs, underlying technology, validation mechanism, distribution architecture and the mechanism how to invest in central bank digital currency.

Also, legal changes would be necessary as the current provisions have been made keeping in mind currency in a physical form.

The digital currency must collect certain basic information of an individual so that the person can prove that he’s the holder of that digital currency and has rightfully invested in Central Bank Digital Currency.

Way Forward
The creation of a Digital Rupee will provide an opportunity for India to empower its citizens and enable them to use it freely in our ever-expanding digital economy. However, looking into its vast impact on banking systems and money markets, it is imperative that policymakers keep thorough due diligence and put necessary checks and balances for smooth roll out of Digital Rupee in India.