Indian Economic Slowdown: A long term problem, how to come out of it? 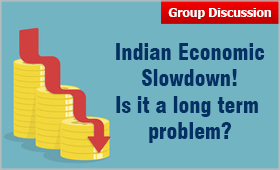 Recent Slow Down of Indian Economy: Impact is Prominent
The GDP growth of Indian Economy has touched the six year low in the first financial quarter of April-June 2020. It touched 5.8% growth in January-March, although in nominal terms India’s GDP grew by 7.99% which is also lowest since December 2002. Key sectors bearing the brunt of Indian Economy slow down are Agriculture, Automobile, Real Estate, FMCG among others.

On the top of it, the Covid-19 pandemic and continuous lock down of Indian Economy since March 2020 has further slashed economic growth in India. In April 2020, International Monetary Fund (IMF) has projected GDP growth of Indian Economy at only 1.9%.

Recent Slow Down of Indian Economy: Impact is Prominent
The GDP growth of Indian Economy has touched the six year low in the first financial quarter of April-June 2020. It touched 5.8% growth in January-March, although in nominal terms India’s GDP grew by 7.99% which is also lowest since December 2002. Key sectors bearing the brunt of Indian Economy slow down are Agriculture, Automobile, Real Estate, FMCG among others.

The $100 billion automobile industry that employs 370 lakh people and contributes 12% to the national GDP, is suffering from huge slow down. Around 3 lakhs jobs are lost, Sales have gone down and the automobile industry appears to be going in reverse gear.

The official data released by the National Statistics Office (NSO) confirm that. Weaker consumer demand and slowing private investments are the two key factors behind the Indian Economy Slow Down.

Eight core sectors have registered negative growth of just 2.1% in July, compared to 7.3% in the corresponding month last year. According to the Centre for Monitoring Indian Economy (CMIE), the overall unemployment in India has now touched 8.2%, with a high urban figure of 9.4%.

FPIs have pulled out a net amount of Rs 5,920 crore even after the government announced a rollback of enhanced surcharge on FPIs. All the sectors need huge investments and remedial measures to increase the demand to improve and take India out of the state of  economic slow down.

Indian Economy, no doubt is passing through a sluggish economic growth since 2016 post demonetization as compared to earlier years, although efforts are being made to improve the Indian Economy’s growth to achieve the rate which may not be considered as very slow.

Indian Economy Slow Down: The facts and background
India’s Economic growth has slowed for 5 consecutive quarters beginning from late 2015-16 onwards. Now growth is slower than it was in the quarter in which The Modi Government assumed office. It could be serious blow for a government that had promised to turn around the economy through decisive governance.

India’s GDP growth has gone down from a high of 9.2% in third Quarter of the year 2016 to 5.7% in current 4thquarter of 2017. The economic growth rate is probably the slowest in last many years. However, Indian Economy as per global standard is not in recessionary stage. The UK and the European Union consider an economy in recession only when real GDP growth actually turns negative over two consecutive quarters and by this criterion, with a positive growth rate of 5.7%, Indian economy is far off from being in a recession.

All four contributors to economic growth – domestic consumption, foreign consumption or exports, private investment and government spending – are hit by the slowdown. In the first quarter of this fiscal year, domestic consumption fell to 6.66% as against 8.41% in the same period last fiscal; exports as a share of the Gross Domestic Product was down to 19% from 20%; and fixed capital formation decreased from about 31% of the GDP to 29.8%, signalling a slowdown in the industry as well.

Causes of Economic slow down
The cause of the problem as shared by some of the experts consists of supply-side shocks. Besides, three important contributors to this problem include Covid-19 Lockdown, Demonetisation & stressed banking sector, GST Implementation and problems in Agriculture sector. The public goods are provided by government and the government needs tax revenues to supply them, and these depend upon national income. Then there is employment. A demand for labour exists only when there is a demand for goods. So growth is necessary if employment is to be assured.

Covid-19 Pandemic
India is under constant lockdown since March 22, 2020 on account of Corona Virus pandemic. All the economic activities have come to a stand still, industries are shut and despite the announcement of Rs.20 lakh crore relief package to various sectors by the Prime Minister of India, Shri Narendra Modi, the economic sentiments have not shown any positive impact.

Rising Pool of Unemployed Youth
There is not only a pool of unemployed persons in India to absorb but the country also needs to provide employment to youth continuously entering the labour force. The slowing of the economy is a source of concern as an economy that has been slowing for five quarters is unlikely to turn around quickly. Besides, it may not be able to revive on its own.

No demand - No Investment: Vicious Circle operates
Since it is capital formation, or investment, that drives growth in the economy, investment is an immediate source of demand as firms that invest buy goods and services to do so. It also expands the economy’s capacity to produce.

The two sources of investment are private and public. The Private investment source is depressed as of now due to the factors cited above and is difficult to revive unless some external force is applied for example – tax sops, incentives for investment, creating demand for certain products through public funded projects among others.

When there is no demand, supply has to be stopped due to piling up of stocks and production units go idle, leading to cut in labour force. It further reduces the income leading to less demand and further reduction in supply and stopping of production.

Since, investment involves committing funds for a long period under uncertainty, the stepping-up of public investment when private firms are unwilling to invest more is required.  Increased public investment increases demand and quicken growth and also encourages private investors, as the market for their goods expands.

Reforms: Are they leading to slowdown?
Structural reforms are being taken by almost all the governments or they have been claiming to be doing for more or less a quarter of a century now. Since 2014, in particular, “the ease of doing business” has received great attention from this government. But, the economy today is still less regulated than it was in 1991. Labour market reforms have not been taken up yet in Parliament. Share of manufacturing may rise if the labour market is liberalised.

Another fact is how the economy came close to achieving 10% growth in the late 1980s and during 2003-08 when the policy regime was no more liberal than it is now. It is also difficult to relate slowing domestic growth to sluggish world trade as data show 2016-17 to be a year of a major turnaround in exports. On the other hand, capital formation as a share of output has declined almost steadily for six years now. In 2014-15 it rose slightly.

Is it temporary phenomenon?
A few of the experts see it as a temporary or technical issue and think that its effects would soon fade out while others view this as a more serious crisis created by a barrage of supply-side shocks to the economy.

However, the crisis is seen as a deep structural issue rather than merely a short-run one. Now the government has to play a key role and understand the economic realities and avoid adventurism in policymaking and implementation.

Corporate sector & Industry criticize the Government
Although, a concrete plan to address the problem is being developed in consultation with Prime Minister Narendra Modi. However, a section of the industry and many economists have criticised the government for not being prudent enough to read the distress signs and for treating the slowdown as temporary and transient.

The economy grew by a mere 5.7% in the quarter ended June 2017. In the first quarter of this financial year, growth fell to 5.7% as against 7.9% in the same period last fiscal year.

How can India come out of slow down?
Leading economists and market researchers suggest following remedies to bring the Indian Economy on high growth track

Let Indian Rupee be weaker
Even a weaker Indian rupee should not be a problem. Stronger rupee is hurting both the exports and the business. Imports are surging and they are eating into the domestic market share. India needs growth now, so there is no need for ratings as of now.

Lower Lending rates
The recently announced monetary policy of RBI has not given any relief to boost Indian economy. The economists now advocate a steep rate cut in the benchmark lending rates to allow for monetary policy expansion. The Reserve Bank needs to cut interest rates for banks, thereby making borrowing cheaper for the industry and spurring investment.

World Bank hopeful: Slow down to wane soon
The recent slowdown in India's economic growth is temporary and is an "aberration" mainly due to the temporary disruptions in preparation for the GST. It will get corrected in the coming months. The World Bank President Jim Yong Kim said that the Goods and Services Tax (GST) is going to have a hugely positive impact on the Indian economy. According to him, "We think that the recent slowdown is an aberration which will correct in the coming months, and the GDP growth will stabilise during the year. We've been watching carefully, as Prime Minister Modi has really worked on improving the business environment, and so, we think all of those efforts will pay off as well."

Accordingly, if the due corrective steps are taken, Indian Economy could come back on rails with a high growth achievement of 9-10% ..