The IT Industry in India -Will it create more jobs in the future? 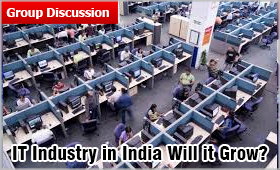 When the growth of internet was taking quantum leaps in the 1990s, nobody thought that a developing nation like India would cash in so much on the web boom and build a massive industry around it employing more than 10 million people. Yet surpassing expectations India did it. The Indian IT industry today made revenues of about $160 Billion in the year 2017 alone and manages to contribute 7.7% in India’s massive GDP.

India’s IT services industry was born in Mumbai in 1967 with the establishment of the TATA Group in partnership with Burroughs. The first export zone, SEEPZ- The precursor to the modern day IT park- was established in Mumbai in 1973. More than 80% of the country’s software exports were from SEEPZ in the 1980s.

The growth in the IT industry skyrocketed with the world wide web turning up on the scene in the 1990s. The Indian economy too underwent major economic reforms in 1991. It led to a new era of globalization and economic integration, IT industry was greatly benefited due to the economic transformation of the country and since then it has grown leaps and bounds.

India is the largest exporter of IT services today. Exports dominate the IT industry and constitute about 79% of the total revenue. The domestic IT industry also has a robust growth with significant revenue. The top 5 IT service providers in India are- Tata Consultancy Services (TCS), Infosys, Cognizant, WIPRO and HCL Technologies.

Features of IT Industry in India include:-

TIDEL Park, situated in Chennai is one of Asia’s largest IT parks. It was established to promote the Information Technology Services in the state of Tamil Nadu.

Cities of India which have become IT hubs include- Bengaluru, Pune, Chennai, Hyderabad, Trivandrum, Chandigarh and Mohali.

In about 10 years the no. of employees in It sector is estimated to be doubled from 1 crore to 2 crores.

FUTURE OF THE IT INDUSTRY IN INDIA
People believing that India has seen the best of the IT industry are in for a surprise. India along with the rest of the world, will see the IT and IT enabled services industry not only developing but also outgrowing other industries with the pace of its expansion.

With emergence of new path-breaking technologies like Artificial Intelligence, Internet of Things, Blockchain, Machine Learning, modern data science practices, cloud computing and big data and introduction and implementation of Microservices, Developer-Operations (devops) and automation in most of the industrial sectors the future of IT industry in India is bright.

It is estimated that in the coming 10 years the no. of jobs in the IT industry will get doubled along with better academic facilities, greater research for the subject of Information Technology and its practices.

Some important points related to the future of IT industry in India are:-

Major challenges that the IT Industry in India will be facing in the future are:-
High unemployment rate of IT professionals- According to corporate surveys, only 20% of the Indian engineering graduates are considered employable because of lack of skills and absence of right attitude.

Changing Technology and trends- Global advisory firm, Mckinsey & Company declared that nearly half of the workforce in Indian IT sector will be irrelevant over the next 3-4 years. It was backed by Capgemini CEO declaring 65% of workforce is not trainable and not keen on upgrading their skills.

Conventional Jobs to be replaced- Typical manual jobs is expected to be taken over by automatic coding and cloud computing technologies.

Uncertain future- Large majority of the workforce today is engaged in jobs that are expected to be non-existent in the coming future. Hiring too will slow down in the near future.

World Bank report- World Bank report titled ‘Digital Dividend’ declares that 69% of work in India can get automated. This may lead to a sudden crisis in the Indian IT industry.

The road ahead for Information Technology industry in India
IT can undoubtedly be considered as one of the most emerging fields yet the challenges are many to tap this resource and use its full potential for the development of the country.

With time Information Technology promises to be less of an isolated technology and is directed towards being an integral part of all development in almost all leading sectors. India, today is regarded as the back-office of the world owing to IT and ITeS industry blooming in India.

It is known that anyone resisting change perishes and it is no mystery that as the world of Information Technology is undergoing major transition globally from simple software development to integrated solutions involving emerging technology stack like cloud computing, Big data and artificial intelligence, India must prepare its workforce accordingly, stay open to new policies and flexible to their approach regarding the industry.

If India manages to transit smoothly and create a skilled workforce armed with expertise in core as well as emerging technologies, establishing more product based startups driven by technology and innovation there will be no stopping India in the Information Technology industry for a long time to come.