Knowledge Based Indian Economy: Crucial for Development of India 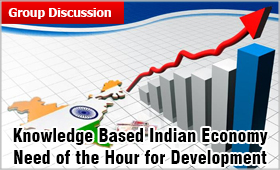 The GD topics made its appearance in the Group Discussion round of FMS Delhi, IIMs and other MBA colleges in India in 2018, 2019. A tricky topic like this left many candidates off guard while participating in the GD round. To help candidates get key details, frame opinion and speak to the point on this topic, the solved topic is placed here.

Knowledge Based Economy: Background
The knowledge driven economy focuses on products and services fueled by knowledge intensive activities. Knowledge economy makes use of knowledge and information to create goods and services. It requires skilled workers with sound analytical abilities and command on their subjects that can manipulate information and are research and innovation driven.

India: Taking Steps to turn into Knowledge Based Economy
With the advent of the Digital India program, India declared its vision to quickly transform itself into a digitally empowered society and a knowledge based economy. Despite being an essentially, agriculture based economy, India realizes the prospect of changing times and developing technology, and it is high time for India to look into this prospect much more seriously as it can’t put pressure of the massive population on agriculture or manufacturing alone.

Knowledge Based Economy: Benefits for India

India Not Ready for Knowledge Based Economy

It is said, ‘Failing to plan is planning to fail’, it might just be the case if precise planning and proper execution is not followed to develop India into a Knowledge based economy. It is a good idea yet its pre-requisites are plenty which if we fail to meet can easily turn the good idea into a bad one.