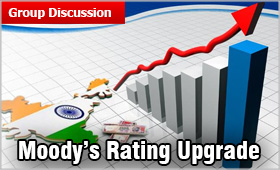 Moody's Investors Service is an international rating agency which enjoys high creditability with its rating to a country’s economy and can improve or deteriorate its growth prospects at Global front. Moody’s higher rating level of Baa2 awarded to India has been upgraded from Baa3. The Baa2 rating shows the improving business climate, enhancing productivity, stimulating foreign and domestic investment, fostering strong and sustainable growth in India. The upgradation to Baa2 from Baa3 by Moody’s has upgraded India's local and foreign currency issuer ratings and has changed the outlook on the rating to stable from positive.

Rating Upgraded after 13 years
The rating upgrade comes after a gap of 13 years - Moody's had last upgraded India's rating to 'Baa3' in 2004.

What made Moody’s to upgrade Rating of India?

Moody’s has upgraded the rating to Baa2 on the basis of key reforms implemented by India. While the government is mid-way through a wide-ranging program of economic and institutional reforms, number of important reforms have contributed to get Moody’s rating upgrade.

According to Moody’s "Moody's believes that those implemented to date will advance the government's objective of improving the business climate, enhancing productivity, stimulating foreign and domestic investment, and ultimately fostering strong and sustainable growth.  The reform program will thus complement the existing shock-absorbance capacity provided by India's strong growth potential and improving global competitiveness."

Key elements which have contributed to improve Moody’s rating are:

This upgrade would lead to investors realising that India is an attractive market. The direct investment should come back in a big way

Moody’s is of the view, "Most of these measures will take time for their impact to be seen, and some, such as the GST and demonetization, have undermined growth over the near term."

Moody's expects real GDP growth to moderate to 6.7% in the fiscal year ending in March 2018. Recent government measures to support SMEs and exporters with GST compliance, real GDP growth is expected to rise to 7.5% in FY2018. For longer term Moody’s expects that India's growth potential is significantly higher than most other Baa-rated sovereign countries...