Privatization of Public Sector in India: A right step or selling family silver? 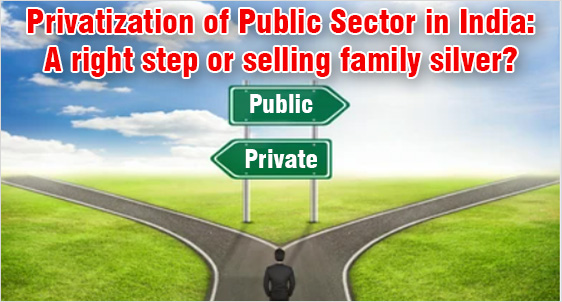 India has a mixed economy in which both Private and Public Sectors exist especially in the areas of Banking, Telecom, Road Transport, Education, Healthcare, Manufacturing, Education among others. Many Business analysts and experts on Economy are of the view that privatization could speed up economic growth with the increase in competition while number of them find that the privatization could bring more problems like unemployment taking the economy backwards due to its inherent issues. Reigniting this age-old debate, on February 24, Prime Minister Narendra Modi said “Government has no business to be in business”.

So, should India opt for privatization or continue with the current system, is a burning discussion topic in view of the various steps taken in different sectors. Whether the move will benefit the country or will not be feasible needs to be discussed. Given the importance of this topic, B-schools have included this topic in their Group Discussion and Extempore rounds. The key facts about the topic and important points of discussion which can be presented during GD round are shared below.

But before we discuss the Pros and Cons, it is very important to read PM Modi’s speech.

“Government has no business to be in business”

“When public sector enterprises were started in the country, the time was different and the needs of the country were also different. The policy that was right for 50-60 years ago, there is always room for improvement. Today when we are doing these reforms, our biggest goal is to use public money properly.

There are many public sector enterprises that are making losses. Many of these have to be supported by taxpayer’s money. In a way, which is the right of the poor, it is the right of the youth filled with aspiration, that money has to be used in the work of these enterprises and due to this the economy also has a lot of burden. Public Sector Enterprises do not have to run only because they have been running for so many years, they have been someone's pet project. Public Sector Enterprises are fulfilling the needs of a particular sector, are connected with a strategic importance, then I can understand the need and also understand its need.

It is the responsibility of the government to give full support to the enterprises of the country, to the businesses, but the government itself should run the enterprises, to remain its owner, in today's era it is neither necessary nor has it been possible. That's why I say - Government has no business to be in business. The government's focus should be on projects related to the welfare and development of the people. More and more government's power, resources and capacity should be used for welfare work. At the same time, when the government starts doing business, there is a lot of damage.

There are many restrictions before the government in the decision process. The government lacks the courage to take commercial decisions. Everyone is afraid of all kinds of charges and court. And because of this, there is a thought that what is going on let it go, I have a lot of limited time. Whoever comes after me will see. Therefore, it does not take a decision as it moves.

Business cannot happen with such thinking, you also know well. Another aspect of this is that when the government starts doing business, the scope of its resources is reduced. The government does not have a shortage of excellent officers, but their training would have been mainly to run the governance systems, follow the policy-making rules, to emphasize the work of public welfare, to formulate the policies required for them and in these things. And their mastery is also there. Because for a long time in life, they have come forward while doing this type of work among people. This work is very important in such a big country.

But when the government starts doing business, it has to be removed from these tasks and to take such promising officers to this side. In a way, we do injustice to his talent, injustice to that public sector enterprise. As a result there is loss of that person, loss of that enterprise. And so it hurts the country in many ways in a way. Our government's effort is to improve the standard of living of the people, besides reducing the government's unnecessary interference in people's lives. That is, there should be no lack of government or influence of government in life.

Today the country has a lot of underutilized and un-utilized assets under the control of the government. With this thinking, we have announced the National Asset Monetisation Pipeline. We have targeted to monetize around 100 such assets like oil, gas, port, airport, power. Of these, investment opportunities of 2.5 trillion rupees are expected. And I will also say that this process will continue. The mantra that the government is moving forward with is Monetise and Modernize.

When the government monetises the private sector of the country fills that space. The private sector also brings investment, global best practices. Top quality brings manpower, changes in management. This makes things more modernized, modernizes the entire sector, expands the sector rapidly and creates new opportunities for jobs. Monitoring is equally necessary to ensure that the entire process remains transparent, under the rules. That is, with Monetise and Modernise we can increase the efficiency of the entire economy further.

The amount received due to the decisions of the government can be used in public welfare schemes. The money that comes from Asset Monetisation and Privatization, makes the house of the poor, that money is used to build roads in the village, that money is used to open schools, that money is used to provide clean water to the poor. There are so many such things related to the common human. Even after so many years of independence, our country has such deficiencies. Now the country cannot wait longer for this.

Our priority is the common citizen of the country, its needs, its needs, it should remain. The government is working fast in this direction. Therefore, every decision related to Asset Monetisation and Privatization, whether citizens are poor, middle class, young, women, who is for the citizens of the country.”

From the above speech, you can get many important justifications in favour of Privatization. Now, lets review both sides of argument.

Privatization of Public Sector: Key facts
Generally speaking privatization is a way of altering the relationship between the state and the private sector to enhance the role of the private sector in the functioning of the national economy as a whole. Accordingly, privatization broadly means any process that reduces the state’s dominant role in directly owning and running the economic activities of a nation. Many countries like China with state controlled economies have gone far enough to open the doors of economies to invite private players to achieve faster growth rate.  The craze for privatization has risen manifold after the ideological defeat and disintegration of the state controlled economy of the socialist bloc.

In a country like India, Privatization in today’s concept is seen as a means of increasing output, improving quality, reducing unit costs, curbing public spending and raising cash to reduce public debt.

Privatization of Public Sector: Need of the Hour
As PM Modi says, Privatization is the need of the hour. As the world economy tends to become one global village, privatization as a policy norm seems to override political compulsions as an instrument for achieving competitive efficiency and resource optimization.

Privatization is beneficial for the growth and sustainability of the state-owned enterprises. Following the trend of privatization across the world, the Indian government in the 1990s also introduced privatization amid hue and cry from many of the political and social groups.

To achieve an increase in the output of the country there is a need for privatization at a rapid scale which will help in improving quality of the products by reducing unit costs, curbing public spending and raising cash to reduce public debt.

Privatisation always helps in keeping the consumer needs uppermost, it helps the governments pay their debts, it helps in increasing long-term jobs and promotes competitive efficiency and open market economy. In a rapidly rising economy like India there is a need for the government to realign its priorities in mobilizing the skills and resources of the private sector in the larger task of the development.

Nowadays privatization is being seen as a solution towards the problems of public enterprises as these enterprises on being transferred from the public to the private hands will become less politicized which as a result will help in ceasing the administrative corruption. It will also help n increasing the tax revenues from profits   and strengthening the public treasury.  The advantages of privatization can be perceived from both microeconomic and macroeconomic impacts that privatization exerts.

Indian economy has a tremendous potential for growth. The economy which used to rise at 3-4% of GDP had steadily registered rising growth from 7 to 9 percent after introduction of reforms.

Privatization: Adverse Impact
However, some economists point to the adverse effect of privatization. They offer following arguments:

Conclusion
Based on above facts and views, you can express your opinion on this GD Topic or in your personal interview or extempore round.