RBI Autonomy: Is the Government out to Impound its Autonomous Status? 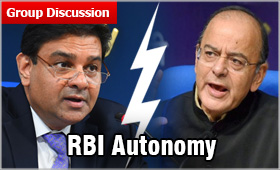 Recent developments have subsided the prospects of rift between RBI and the Government. The earlier event indicating the beginning of conflict between the Apex Monetary Authority The Reserve Bank of India (RBI) and the Financial Authority – Ministry of Finance-Govt of India had sparked speculations that the Governor of RBI, Mr Urjit Patel could step down as the RBI feels that Government which should not interfere in its Monetary affairs in keeping and improving the monetary position of the country to a healthy and globally competitive standard, was trying to make unnecessary intervention that may hamper its autonomous working.

With the marathon meeting of RBI Board held on Nov 19, 2018, the Government and the RBI both decided not to follow the path of confrontation and arrive at certain decision for good of the economy and keep the confronting issues in abeyance.

This has become a hot economic topic for Group Discussion (GD) Round as well as for Writing Ability Test (WAT) in various competitive exams. Experts have gathered the key facts on the topic and suggest to use the content carefully as per the GD or WAT requirements.

Reserve Bank of India Board held a 9 hours long meeting on November 19, 2018 to discuss various issues that created rift between the RBI and the Government of India. The issues included: Capital Requirement of RBI; Financing Norms for Small and Medium enterprises (SMEs); and to further define and modify the Rules for Weak Banks. The meeting ended calling a truce between the Government and the Reserve Bank of India with following decisions:

As such, now the prospects of invoking Section 7 of RBI Act 1934 by the Government, are very dim and the Central Government and RBI relationship may not go low.

What is Section 7 of RBI Act 1934?
The Section 7 of RBI Act has three parts. The most relevant first part which has sparked the tensions between RBI and the Government, states: “The central government may from time to time give such directions to the Bank (RBI) as it may, after consultation with the governor of the bank, consider necessary in the public interest.”

The Part two of the section 7 of RBI Act says, “Subject to any such directions, the general superintendence and direction of the affairs and business of the Bank shall be entrusted to a central board of directors, which may exercise all powers and do all acts and things which may be exercised or done by the Bank.”

Why the Need Felt by Government to Invoke Section 7?
So far the discussions and consultations between the Ministry of Finance and the Reserve Bank of India have taken place without resorting to use of Section 7. The invocation of section 7 of RBI Act is considered very important for consultations as it gives the Government the scope to issue directions as it finds fit to the Reserve Bank of India.

It is also contemplated that the government might have drawn inspiration for using the Section 7 from a recent judgment of the Hon’ble High Court of Allahabad delivered in a case filed by power producers against the RBI’s February circular that mandates early detection and time-bound resolution of stressed assets. The High Court had asked the finance ministry to have consultations with the RBI within 15 days, under Section 7 of the RBI Act 1934 to resolve the issue.

HC Asks Government Not to Issue Directives to RBI
In its order on August 28, the HC had asked the Govt to refrain from issuing any directives to RBI. The order said “The central government, however, is not expected to issue any directions, as contemplated under Section 7(1), indiscriminately or randomly. Such directions are possible when there exists sufficient material in support.”

RBI Conveyed it Position: Differs from Govt Point of View
In its reply to the Ministry of Finance on the three letters, RBI has conveyed its position on the need to retain the “stringent” prompt corrective action (PCA) framework for stressed banks and has stated that there is no liquidity crunch. The MoF, Government of India and RBI have also differed on the issue of capital adequacy norms for banks.

However, the ministry of Finance wants the stipulation aligned with the international practices also, so that banks can lend more and add to economic growth.

Delivering the AD Shroff memorial lecture, Acharya said governments that did not respect their central banks' independence would sooner or later incur the wrath of financial markets. The much discussed famous speech, ‘On the Importance of Independent Regulatory Institution – The Case of the Central Bank’, by Acharya reaches a host of issues.

The content of the speech which confronts the Government on all the issues against its move to undermine the autonomy of RBI has aroused unprecedented media response. Acharya’s speech reveals that he has also spoken for the restoration of RBI autonomy and built a strong and positive case for RBI independence in three important areas — monetary policy, debt management, and exchange rate management.

Acharya has pointed out that the breaking down of the RBI autonomy is associated with the context of regulation of public sector banks, absence of rules of transfer of surpluses from the RBI to government and recommendations to bypass the RBI’s powers over payment and settlement systems.

Acharya has pointed out that RBI faces constraints in the regulatory framework as well as in implementation of the regulatory decisions in the regulation of banks, particularly public sector banks. These limitations are related to asset divestiture, replacement of management and boards, licence revocation and resolution actions such as merger or sales.

In another speech, on October 12, titled ‘Prompt Corrective Action: An Essential Element of Financial Stability Framework’ Acharya warned the Government against on diluting the risk threshold set out by the RBI in various indicators.

While the RBI has insisted on Prompt Corrective Action (PCA) as a regulatory framework to ensure a healthy banking system for long-term growth, macroeconomic stability and financial stability, the Government, if it does not respect central bank independence will sooner or later incur wrath of financial markets, ignite economic fire and come to rue the day they undermine the regulatory institutions.

Acharya said that the government's horizon of decision-making was rendered short, like the duration of a T20 match, by several considerations.

RBI Autonomy at Stake: Experts’ Views
The autonomy of the central bank has not been debated for the first time in the Indian context. Governor after governor has raised this issue.