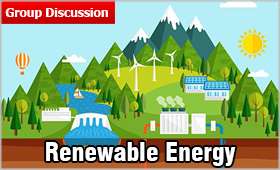 With depleting Oil reserves across the world, Renewable Energy is a global as well as National priority. Indian Government, in the leadership of PM Narendra Modi, has positioned India as a major player in this area.

There are many forms of renewable energies. Key forms are:

India – World’s third largest Energy Consumer
India, the world’s third-largest energy consumer after the US and China, is working to meet 100 GW solar power target by 2022 as part of its Global Climate Change commitments. It has a good chance to achieve this target and lead the world.

India has already crossed 25 GW in terms of total installed solar capacity. In the first six months of 2018 alone, appx 5 GW of solar capacity was installed in India. According to Ministry of New and Renewable Energy, Solar energy capacity has gone up from 2.63 GW in 2014 to 22 GW currently, an eight-fold increase!

Similar progress is also being made in other areas like Wind Power. Last year, India attained the fourth position globally in installed wind power, with capacity increasing from 21 GW to 34 GW in the past four years. Renewable power installed capacity has already reached over 70 GW, taking the country to the 5th rank globally; another 40 GW is under construction or has been tendered.

Government Initiatives in Solar Energy Sector
To realise the target, the government has initiated numerous policy measures, such as:

International Solar Alliance – ambitious initiative by Government of India
The International Solar Alliance (ISA) is an alliance of more than 121 countries initiated by India, most of them being “sunshine countries”, which lie either completely or partly between the Tropic of Cancer and the Tropic of Capricorn. The primary objective of the alliance is to work for efficient exploitation of solar energy to reduce dependence on fossil fuels.

This initiative was first proposed by Indian Prime Minister Narendra Modi in a speech in November 2015 at Wembley Stadium. The initiative was launched by Prime Minister Narendra Modi at the India Africa Summit, and a meeting of member countries ahead of the 2015 United Nations Climate Change Conference in Paris in November 2015. It is headquartered in India. In January 2016, Narendra Modi, and the then French President François Hollande jointly laid the foundation stone of the ISA Headquarters and inaugurated the interim Secretariat at the National Institute of Solar Energy (NISE) in Gwal Pahari, Gurugram, India.

Optimistic Government
"We are well on track to achieving 175 GW target of installed renewable energy capacity," the Ministry said in a media statement in September 2018, adding that "Trends suggest that the target will not only be achieved but exceeded."

Significantly, the ministry claimed that investments of over $42 billion have been made in renewable energy during the last four years and that the projects set up in the space during this period have created around 10-million-man day's employment per annum.

Concerns Remain
But there are concerns of excess capacity, energy demand and implementation of the plan, according to experts.

Recently India’s plan to push solar farm developers to also make photovoltaic panels received a tepid response, forcing the government to extend the deadline for the largest such auction the second time. The tender asking developers to also make 50 percent of the panels used in a project attracted only one bidder. The last day to submit the bids has been extended till Oct. 12, according to a statement by the state-run Solar Energy Corporation of India Ltd. It had earlier extended the first Aug. 27 deadline by a month. While it didn’t give reasons, a senior official from the corporation said requesting anonymity that players sought more time to tie up with global manufacturers for bidding.

Given the importance of this subject, this is a key topic for GD and Essay. Students will do well to prepare this well.