RERA: Will it restore the trust of home buyers? 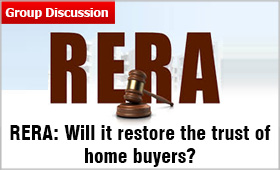 The Real Estate (Regulation and Development) Act, 2016 (RERA) came into effect from May 1, 2017. RERA is effective on all the residential and commercial projects in all the states of India. RERA is an Act passed by the Parliament and seeks to protect interests of home-buyers and simultaneously to boost investments in the real estate industry. The Act establishes Real Estate Regulatory Authority (RERA) in each state for regulation of the real estate sector and also acts as an adjudicating body for speedy dispute redressal.

It has been a persistent complaint by the home buyers that real estate rules and transactions were in favour of the builders and home buyers in almost all the cases suffer loss. Government of India, in view to protect the interests of home buyers passed and implemented RERA which requires developers to remain transparent throughout.

RERA will impact adversely on the Real Estate activity which is already reeling under the pressure of low demand, financial crunch due to various factors including Demonetization. Indirectly it will impact upon the home buyers.

Following states have implemented and notified rules under RERA:

Enactment of law and its strict implementation is done by two different agencies. Implementation of RERA has no doubt landed many builders in jail but the problem of home buyers are not solved as they are still unable to get the possession of the flats, offices, shops. Many builders like Unitech are offering possession without obtaining completion certificates. On the top of it, the possessions handed over in 2018 are forcefully getting accepted by the home buyers on the back date of July 2017 – date before implementation of RERA.

Accordingly, authorities responsible and linked to RERA must come out of their cozy comforts and must implement the ACT as it is needed.