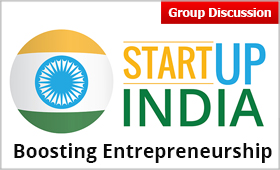 Startup is great idea…needs encouragement
India’s demographic dividend is conducive to Startps with high potential. India as the youngest nation in the world and huge overall population has one of the largest consumer base in the world. For every unique need of every segment of population there is opportunity for new venture. Our infrastructure, healthcare, education systems are in dire need of up gradation where startups can make huge difference.

Challenges and hurdles
Startups are facing many challenges and hurdles despite commitment by the Government to provide all the support and finance. The biggest challenge before success of campaign is parameters of Ease of doing business, corruption, availability of skilled labor among others.

Startups find it difficult to have access to credit. Attracting investors to fund ventures or getting loans from banks are perennial problems for startups. Despite all the commitment, Banks are not giving loans to startups without prior credit history. Many times despite raising sufficient initial capital, startups find it difficult to survive as they can’t match revenue and burn rate mostly because of changed economic factors. Finding right skilled human power is another biggest challenge before startups. India’s need of skilled labour is so huge that National Skill Development Corporation (NSDC) has been mandated to skill 150 million Indians by 2022. For a startup, it is difficult to attract and hire talent and skilled workers, since they cannot match salary level given by large, established companies and also cannot offer job security on long term basis. Startup failures are looked down upon. Failures are not met with encouraging advices in most of the cases. People are sensitive towards risks and rewards and Indian economy which is highly price sensitive, worsens the situation. Right kind of mentorship is not available. Available mentorship and skill enhancement may not be accessible in all the cases. So though someone has potential to start something and may be that idea is really revolutionary but if that doesn’t meet right guidance to turn it into a successful business then that idea remain irrelevant. Huge, diverse demographics makes it really hard to capture consumer’s mindset in Indian Market. Literally after every 30-40 km region, one can find change in taste, traditions and habits. If a firm is able to capture consumer mindset, it cannot cater to all of their needs. Most startups get stagnant in figuring out strategies and they eventually shut down. Location is another hurdle. Location depends on investment activities also. Startup India has also formed a relationship with TAVtech Ventures, a nonprofit educational organization that is establishing a platform for collaborative innovation between US, Israeli, and Indian students to launch start-ups.

Under the scheme, a group of start-ups will acknowledge an MOU with the prestigious institutions and will also establish the start-up centers in the campus.

NIT-Silchar is one of the institutions of the country to have joined the program. IIT Madras is also linked with Startup India campaign. The institution has been successfully managing the IITM Research Park which has incubated many start-ups.

Success of Startup India campaign
In last 2-3 years, there has been increase in startups in versatile areas like retail, food delivery, consulting, e-commerce, medical services, delivery services, fitness among others. On an average 800 startups are born every year. Startups are evolving in terms of product capabilities, networking, taking calculated risks venturing into new spaces.

Delhi NCR and Bangalore has highest number of startups predominantly because of economic activities of population of both cities. Cities like Jaipur, Chandigarh, Chennai, and Jodhpur are witnessing increasing startup activities. Successful startup like Zo rooms was conceived in small city like Jodhpur. Southern States like Karnataka, Kerala, Andhra Pradesh and Telangana have shown better results than the rest of the country in terms of their policies implementations for supporting startups. These states have focused on improving infrastructure, especially in the Tier-II cities.  Launch of "Kerala IT Mission", which focus on fetching ₹50 billion (US$780 million) in investments for the State's startup ecosystem is a great example Kerala has made India's first telecom incubator Startup village in 2012. The state also matches the funding raised by its incubator from Central government in 1:1 ratio. Telangana has launched the largest incubation center in India as "T-Hub".  Andhra Pradesh has allocated a 17,000-sq.ft. Technological Research and Innovation Park as a Research and Development laboratory. It has also created a fund called "Initial Innovation Fund" of ₹100 crore (US$16 million) for entrepreneurs. Madhya Pradesh has collaborated with the Small Industries Development Bank of India ISIDBI) to create a fund of Rs. 200 crore (US$31 million) for Startup India campaign. Rajasthan has launched "Start-up Oasis" scheme. Government of Odisha organised a two-day Start-up Conclave in Bhubaneswar in November 2016. The main objectives of the event was to motivate youth towards entrepreneurship, showcase the start-up ecosystem in Odisha and attract more start-ups to the state.

Investments and set ups
SoftBank, with its headquarters in Japan has already invested US$2 billion into Indian startups. Total investment from Softbank is expected at US$10 billion.  Google has declared to launch a startup on the basis of the highest votes in which the top three startups will be allowed to join the next Google Launchpad Week, and the final winner could win an amount of US$100,000 in Google cloud credits. Oracle has announced to set up nine incubation centres in Bangalore, Chennai, Gurgaon, Hyderabad, Mumbai, Noida, Pune, Trivandrum and Vijaywada

Objectives of Startup India
Startup India is focused to restrict role of States in policy domain. It proposes to abolish the ‘Licence Raj’ along with other obstacles like in land permissions, foreign investment proposal, environmental clearances among others. The government has already launched iMADE, an app development platform aimed at producing 1,000,000 apps and PMMY, the MUDRA Bank - a new financial institution set up for development and refinancing activities relating to micro units with a refinance Fund of ₹200 billion (US$3.1 billion). Applications for Startup India will have Single Window Clearance even if they are submitted with  the help of a mobile application Rs. 10,000 crore fund earmarked for Startups Patent registration will be at a reduced fee Bankruptsy code modified and made more friendly to ensure 3 months exit window No inspections for 3 years No Capital Gain Tax for 3 years No tax on profits for 3 years Startups are Self-certification compliant Innovation hub under Atal Innovation Mission The campaign aims to Start with 5 lakh schools to target 10 lakh children for innovation programme New schemes to provide IPR protection to start-ups and new firms Encouraging entrepreneurship at every stage. Stand India across the world as a start-up hub

Background
Startup India aims to promote bank financing for start-up ventures to boost entrepreneurship and encourage start ups with jobs creation. Startup India campaign was first announced by Prime Minister Narendra Modi from the Red Fort in his August 15, 2015 address to the Nationa Startup India was inaugurated on January 16, 2016 by the Union Finance Minister, Mr. Arun Jaitley. Around 40 top CEOs and startup founders and investors attended the event. Startup India campaign was organized by Department of Industrial Policy and Promotion.