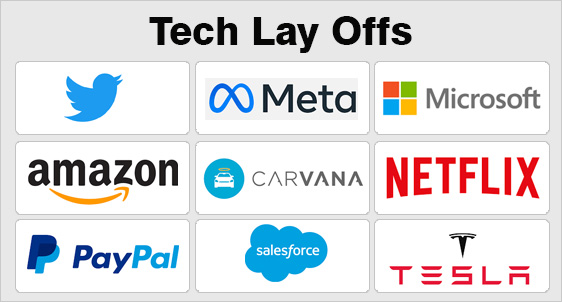 Group Discussion is an important part of final selection round in top MBA colleges and various class-1 and class-2 services. MBAUniverse.com is providing more and more important solved GD topics for the benefit of MBA aspirants and top job seekers. One such hot GD topic is Tech Layoffs which may be presented in GD round in MBA admission this year. This solved GD topic includes concept and details about Big Tech layoffs like Meta Layoffs, Microsoft layoffs 2022, Amazon Tech Layoffs, other Tech Company layoffs 2022, Layoffs in India 2022.

The Global tech giants are on a massive layoff mode! According to TrueUp’s tech layoff tracker, there have been 1138 rounds of layoffs at tech companies globally so far this year, affecting 182,605 people (October, 2022). Almost all large US IT companies including Meta, Amazon, Twitter, Google, Microsoft have or are already freezing and slowing down hiring in the face of recession fears, slow consumer spending, higher interest rates, and the impacts of inflation.

Over the course of just a couple of months, the industry has experienced some of the largest tech layoffs in history. Earlier, Microsoft, Apple, and Google, to name a few, announced a hiring freeze and slowdown for the rest of 2022, however, eventually, all the major big tech companies started laying off major portions of employees. Why Tech layoffs in US?

These payoffs are not just happening in US, and Europe but even in India, especially in Edtech and other frothy sectors. In this article, we review largest big tech layoffs 2022 conducted by big tech companies. We also discuss how MBA aspirants and students can prepare for this topic and trend.

Amazon Tech Layoffs: Nov. 14, 2022
Amazon Tech Layoffs are set to cut close to 10,000 employees, according to a Nov. 14 report from The New York Times. Though the cuts would be just a small fraction of Amazon's 1.5 million-strong workforce, they include technology as well as corporate staff, according to the report. While Amazon did not immediately respond to requests for comment, its most profitable division, Amazon Web Services (AWS), has been showing signs of growth deceleration since the beginning of this fiscal year. During Amazon's third quarter earnings call with analysts, CFO Brian Olsavsky attributed the decline to macroeconomic conditions that were forcing Amazon customers to cut down on spending. Earlier in the month, the company sent out a note to all its employees saying that there was a hiring freeze being put in place for all Amazon corporate positions.

Microsoft Tech Layoffs: Oct. 17, 2022 —1000 people
After reportedly committing to nearly double its budget for salary hikes in May in order to retain employees, Microsoft Tech Layoffs included close to 1,000 employees. The job cuts affected employees throughout many different levels of the company, areas of the world, and company departments — including the Xbox division, Strategic Missions, Technology Orgs, and Edge teams.

In an Oct. 17 statement, Microsoft said: “Like all companies, we evaluate our business priorities on a regular basis, and make structural adjustments accordingly. We will continue to invest in our business and hire in key growth areas in the year ahead.”

This latest wave of job cuts came three months after Microsoft laid off less than 1% (around 1,800) of its 180,000 workforce and removed open job listings for its Azure cloud and security groups.

Meta Layoffs 2022: Nov. 9, 2022 —11,000 people
Three days after it was first rumored that Meta CEO Mark Zuckerberg was planning to dramatically reduce the company’s headcount, the parent company of Facebook, Instagram and WhatsApp, confirmed that it was preparing to cut 11,000 jobs, impacting 13% of its global workforce.

In a statement, Zuckerberg said that the company had already sought to cut costs across the business, including scaling back budgets, reducing perks, shrinking its real estate footprint, and restructuring teams to increase efficiency.

The news came mere weeks after weak performances from Facebook and Instagram saw $80 billion wiped off Meta’s market value and its share price drop to less than a third of what it was at the start of the year.

Salesforce Layoffs
Enterprise software company Salesforce is currently planning to lay off over 2,100 employees in a fresh round of job cuts. Hundreds of employees are going to get fired over performance issues and other factors. The employees will be put under a 30-day review, with the aim to let them go after a month.

Lyft Layoffs
Lyft has cut off almost 13% of its employees. This is also the second time the company has reduced its headcount since July. In its latest job cut, the company terminated almost 600 employees as Lyft executives planned to reduce operating costs. The company also expects to suffer a charge of approximately US$30 million for these layoffs. It is said to incur these costs during the fourth quarter of 2022.

Twitter Layoffs: Nov. 3, 2022—3,750 people
Twitter’s new owner, Elon Musk, wasted no time flexing his newfound authority over the social media giant, firing roughly half of Twitter’s 7,500-strong employee base a week after his deal for the company closed..

While these layoffs represent the biggest workforce cull Twitter has seen, it’s not the first time this year the company has sought to slim down its employee base. After initially implementing a hiring freeze, in July 2022 the company went on to lay off 30% of its talent acquisition team.

Ten days after the initial round of job cuts were confirmed, several outlets reported that Twitter had also eliminated between 4,400— 5,500 contract workers without notice. According to a number of news media reports, most contract employees only found out they’d been terminated after losing access to the company’s email and internal communications systems.

In 2021, the San Franciscan company became the most valuable US startup, when it was valued at $95 billion. However, according to a report by the Wall Street Journal in July this year, Stripe cut the internal value of its shares by 28%, lowering its internal valuation to $74 billion.

Layoffs in India 2022
As of November 2022, about 16,000 employees by 50 Startups have suffered layoffs in India 2022, including unicorns BYJU’S, Chargebee, Cars24, LEAD, Ola, Meesho, MPL, Innovaccer, Udaan, Unacademy and Vedantu.