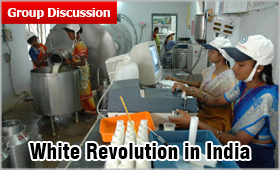 The White Revolution in India was successful in transforming the country from a milk deficient nation to a world leader in milk production. It helped dairy-farming become India’s largest self-sustaining industry and also, India’s largest rural employment provider.

White Revolution: A Dire Need for India
The pre and immediate post independence era witnessed India crying for milk. When the Britishers finally left India in 1947, they left India crippled with low production capacity, no technical know how to improve its economic condition. On the top of it, the partition led to political and military crisis. Yet India needed to rebuild itself.

The foundation for white revolution was laid in 1964-65’s Intensive Cattle Development Program (ICDP), in which a package of improved animal husbandry was given to cattle owners to initiate the white revolution in India.

The milk man of India, ‘Dr. Varghese Kurien’ led India away from the darkness of lack of education, less productivity, use of obsolete means , poor conversion rate to the light of massive milk production, refinement in the dairy-agricultural sector, breaking of conventional barriers of caste and gender parity. Very rightly, he has been termed ‘Father of the white Revolution’.

Operation Flood: Boost for White Revolution
The revolutionary, ‘Billion-litre idea’ and execution of the world’s largest dairy-agricultural development program, ‘Operation Flood’ transformed India from a nation with potential in the dairy industry to a nation with massive production of milk and dairy products.

Operation Flood is the program that followed in 1970, initiated by the National Dairy Development Board to speed up "the White Revolution." It created a national milk grid linking producers throughout India with consumers in over 700 towns and cities, reducing seasonal and regional price variations while ensuring that the producer gets a major share of the price consumers pay, by cutting out middlemen.

The bedrock of Operation Flood that made the White Revolution a success, was village milk producers' co-operatives, which procured milk and provided inputs and services, making modern management and technology available to members. Operation Flood's objectives included:

3 Phases of Operation Flood: Surpassing the White Revolution Targets
Phase 1 (1970-80) of Operation Flood that provided a great boost to White Revolution programme, was Financed by the sale of skimmed milk powder and butter oil donated by the European Economic Community through the World Food Program. During this phase, 18 of India’s premier milk sheds were linked with consumers in India’s major metro cities.

Phase 2 (1981-85) of Operation Flood that flooded India with milk, surpassing the targets of White Revolution in India saw the Milk sheds going up from 18 to 136. Urban markets expanded the outlets for milk to 290. By the end of 1985, a self sustaining system of 43,000 village cooperatives had been covered.

Phase 3 (1985-96) of Operation Flood enabled the dairy cooperatives to expand and strengthen the infrastructure. Great technology upgrade in the dairy industry was a hallmark of this phase that made White Revolution an ongoing activity without looking back.

Few critics do argue that due to white revolution in India, importance has been given to high yielding breeds only, resulting in decimation of the Indian breeds. They argue that although foreign breeds yield high they require greater feed and are not suitable to Indian conditions.

The entire white revolution can be summarized as a purpose for empowering the Indian farmers and the agriculture in India. It was a brave attempt to give the dairy farmers the control of their own fate and to tap into the massive dairy resources present in India. Despite all the criticisms, the critics agree that the White Revolution very well transformed India into the dairy powerhouse of the world.