Agnipath: Will it Prove a Military Transformation Scheme? 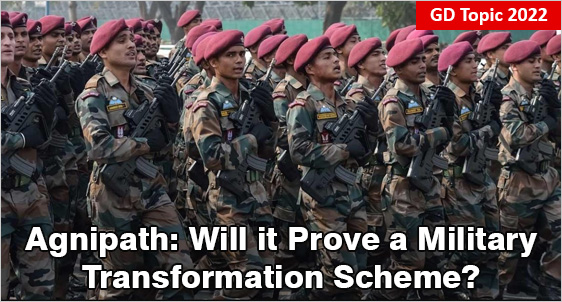 On June 15, 2022 The Narendra Modi government introduced the new recruitment initiative for the armed forces. Defence Minister of India, Rajnath Singh and the three service chiefs announced the new soldier recruitment scheme. Under this scheme armed forces recruits can serve for a four-year-period followed by compulsory retirement for 75 percent soldiers recruited under Agnipath without gratuity and pension benefits.The new scheme for the recruitment of soldiers in the Army, Navy and Air Force is projected by the government as a major overhaul of the decades-old selection process to enhance the youthful profile of the three services. The soldiers who are recruited under the 'Agnipath' scheme will be known as 'Agniveers'. Under the scheme, the Army is likely to recruit around 40,000 soldiers, the Navy is expected to induct around 3,000 sailors and the IAF is set to recruit 3,000 airmen in the year 2022.

However, within two days of announcement of the Agnipath Yojana for military recruitment, wide spread violent protests due to the concerns raised by prospective soldiers erupted across the country resulting in burning of buses and trains, damage to other public property.

An important GD topic for MBA admission 2023, Recruitment in various services and other academic courses, the background of launching Agnipath, its key highlights, reasons for protests, benefits and criticisms should be understood well, before framing your opinion on the topic:

Agnipath Scheme: Background and Need for Launch
There has been no recruitment conducted for Army Since 2019 due to Covid-19 pandemic. However, during last three years, more than 150,000 soldiers have retired as 50000 to 60000 defence personnel retire every year. This has created massive manpower shortage in defence forces and is adversely affecting the operational capabilities of the Army.

According to Union Home Ministry data, 73,219 posts are vacant in CAPFs and Assam Rifles alone. CAPF, with a strength of 10-lakh-personnel is one of the largest employment generating forces under the home ministry. Apart from this 18,124 posts are also vacant in police forces in Union Territories. To fill all these vacancies, especially below the rank of commissioned officers, the need for massive recruitment drive was felt and as such the innovative ‘Agnipath’ scheme for soldier recruitment has been announced.

Agnipath Scheme: Eligibility & Key Highlights
The Agnipath scheme is a PAN India merit based recruitment scheme under which sailors, airmen, and soldiers will be recruited to serve Army, Air Force and Navy. The age limit and academic eligibility criteria for soldier recruitment under Agnipath scheme for the year 2022 and 2023 is different as shared below:

Agnipath Scheme 2022: NIOS Special Course Benefits
The NIOS special course for Agniveers will benefit them in different ways including self-learning, certification, evaluation, personal contact program among others. Some of the key  benefits of the NIOS Agnipath scheme for Agniveers are:

Skill Development Under Agnipath Scheme
Building the foundation, various key areas of skill development have been identified for Agniveers. These are

Employment Options for Agniveers after 4 Years

Agnipath: Why the Scheme is Criticised and Face Protests?

Agnipath: Not a New Idea; Tested Scheme in Many Countries
On the criticism that the short-duration tenure of 'Agniveers' will harm the effectiveness of the armed forces, the officials said such a system exists in several countries, and hence, it is already tested out and considered best practice for an agile army.

Indian Air Force Chief Air Chief Marshal Vivek Ram Chaudhari said, “the domains of warfare are changing, we need younger, more tech-savvy people in the services. For the IAF in particular, we will benefit from having to select the more technically qualified people for their particular job that they are going to do in future in the Air Force.”

Army Chief Manoj Pandey said that emerging technologies such as artificial intelligence, quantum computing robotics and hypersonics are no longer confined to theories but are physically manifesting in battlefields. Accordingly, transformational reforms are underway in the armed forces in the human resources management and other domains such as capability development with focus on 'Atmanirbharta'

As violent protests raged in multiple states, the government issued a clarification, asserting that the new model will not only bring in fresh capabilities to the armed forces but also open up avenues for youth in the private sector and help them become entrepreneurs with the aid of the good package they will be entitled to on retirement.

Several in the government defended the scheme. Tarkishore Prasad, Bihar’s BJP deputy chief minister, said: “I don't think our youth understood the scheme properly or are confused." He also said both the state and the Centre are serious about their induction into the scheme.

The Ministry of Defence clears ‘myths’ about the scheme by clarifying the doubts of the veterans that caste-based regiments that pride themselves for their martial traditions like the Gorkha, Jat, Sikh, Rajput, and Madras regiments would cease to exist as the Army would transition into an all-class one; and emphasized that four years were enough to provide adequate levels of training to turn boys/girls into soldiers.