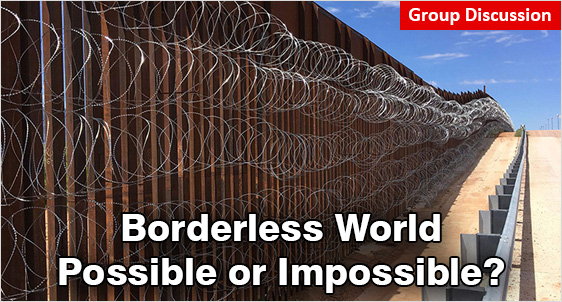 While the world is moving towards more collaboration and integration, is a truly borderless world possible? Certainly, a borderless world is a utopia that will benefit most of the world, particularly the poor countries and citizens. Rise of Social Media too has made world borderless in some sense. However, as Nationalism rises across the globe, a true borderless world will face many challenges. Given the importance of this GD Topic, MBAUniverse.com has prepared this article to explore both sides of this debate. So, continue reading…

Yes - A borderless world is possible!

1. Globalization is here to stay.
Globalization refers to several different concepts all rolled into one package. It may refer to the ease in which businesses conduct operations in different countries other than their own. Some look at this subject as a way to create a world without national borders. There are concepts of communication, information access, and technology development to consider when looking at this subject matter too.While with rise of protectionism and nationalism, there have been hiccups in last few years, experts say globalization is here to stay. Global industry supply chains are far too closely linked to be decoupled now. Experts point to a lot of advantages of globalization like cheap products and access to people skills across borders.

2. Advantages of globalization are far more

2.1 Globalization allows us to pool all our resources together.One of the best examples of globalization is the construction of the International Space Station. The cost to construct the ISS was $150 billion. The United States, Russia, Canada, Europe, and Japan are all involved in the financing and continued operations of the program. So, when nations work together to fund common goals, then more money becomes useful for needs other than national defence.

2.2 Globalization reduces the prospects of military rule, autocracy and tyranny. As the world moved slowly toward globalization in the 20th century, the nations realized that having a concentrated power with one administration reduced the likelihood of tyranny in pockets around the globe.

2.3 Globalization would help the developing world progress faster. Most of the world today is not developed. By reducing border restrictions, creating common payment formats, and opening product access by reducing export barriers, more people could improve their way of life. Higher incomes often lead to lower maternal and infant mortality rates too, which means we’d be saving lives with this effort.

2.5 Globalization could create more employment opportunities. With fewer barriers to the import/export market, the cost of producing goods or offering services would decline without affecting the profit margins of companies.

3. COVID 19 Pandemic has brought world closer
Crisis brings people together, goes a saying. Countries like India are spreading goodwill and bringing world together by sharing Vaccines with less developed countries around the world. This will bring bonhomie.

4. Digitalization has already made world borderless.
Virtual world is already borderless! Through Facebook and similar apps we are connected to the world. Without a borderless world the 4th industrial revolution cannot be materialized. World community sense gradually emerging through internet. To combat global warming and climate change we are compelled to establish a borderless world society without commodity money and capital.

No - A borderless world is practically impossible

While we are moving closer to a borderless world, there are many challenges.

1. Rise of Nationalism across the global

Nationalism is on the rise in the United States and growing in many countries across the world. One important reason that nationalism is that we live in an increasingly fearful society. There is an evolutionary tendency to protect your own group while being more fearful and hostile towards others. This is because people used to have to compete for resources and food, so people outside your own group could pose a threat to your wellbeing. But even now that we aren’t competing for resources in the same way, our fear of others leads to strong feelings of nationalism.

Countries like the United Kingdom have become increasingly nationalist which is evidenced by their recent Brexit vote to leave the European Union (EU). They voted to leave because they believed they needed to focus on their individual country and do what’s best for them rather than what’s best for the countries in the EU. Other European countries are increasingly nationalist and anti-immigrant. Some countries have even considered paying Turkey to take back their refugees.

2. The Need to Protect Heritage

People become more nationalist in their beliefs because they want to maintain the national identity of the country and protect it from immigrant influence.

Historically, nationalism and far-right movements spring up in times of poor income distribution. For example, in the 1930’s Europe faced an economic downturn from the Great Depression and the working class making less than ever. With people making less money, they needed someone to blame and immigrant workers became the scapegoats. This led to the rise of nationalism that eventually led to the rise of Hitler and the Nazi party.

4. If borders are removed, population distribution would be skewed
If we aim for a borderless world, the population density would rise in developed regions where the infrastructure has been built for a lesser population. This will impact the availability of food and other amenities. As the US occupies 25 percent of the global economy, a borderless world implies imports and exports make up 75% of the global economy. This would entail total trade levels of 150 percent of GDP. Our real total trade levels are 29%, with imports pegged at 17 and exports at 12 percent. This means the economy is nowhere near a borderless state and can never be.

While a truly borderless world looks to be an ideal situation,it is practically impossible. In a borderless world, there will be no visa, no passport, one can visit anywhere and can settle anywhere of one’s choice! But this is a distant dream and will require global will and resolve to bring most of the world together.