Coal Crisis in India: Key Facts, Reasons, How to Overcome? 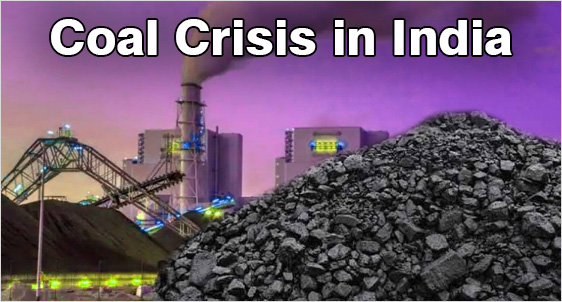 The coal crisis brings a sense of déjà vu as the storyline seems similar to what happens when there is a shortage of sugar or onions. The difference is that the shortage of farm products is normally due to crop failure while the reasons for coal shortage are more human-made.

India is on the verge of a power crisis as the stock of coal at country’s thermal power plants has hit at critically low levels. Many power plants are operating with zero reserve stock or with stocks that could last just a few days. Many States have resorted to load-shedding to save power.

India’s thermal power plants contribute highest share in power generation. But they are facing a severe coal shortage, with coal stocks having come down to an average of  4-5 days from earlier 15-18 days. Union Power Minister R K Singh has said that while the supply crunch has not yet led to any power cuts in the country, the coal supply situation may remain low up to six months.

While Finance Minister Nirmala Sitharaman, has termed the worries about a possible shortage of coal and power supplies “absolutely baseless” and said that India is now a power-surplus country, the latest report by CRISIL Research says, “Coal stocks are unlikely to improve to the previous level of 15-18 days inventory anytime soon.” This has come as a surprise as India is said to have fourth largest coal reserves and is considered a coal surplus country. It may be noted that India’s coal fired thermal power plants account for 208.8 GW or 54 per cent of India’s 388 GW installed power generation capacity.

Why Coal is so Important?

In the power mix production and supply, the maximum contribution is of thermal power. Its Generation depends upon Coal Avaailability and its shortage causes electricity outage not only in residential areas but also affects industrial production adversely causing the economy to go out of gear. How the Coal Shortage is Impacting India? How to Overcome the Coal Crisis? Way Ahead
Government of India is taking aggressive measures to overcome the crisis. Some of the key measures being taken by the Government and the Way Ahead to improve the situation are

Hope this topic discussed in detail must have been found useful by you to know all about the Coal Crisis in India and the way ahead to overcome the problem. MBAUniverse.com will post more relevant topics to help you getting through the GD, WAT and PI round