End of subsidy regime: Step needed to propel the wheel of growth 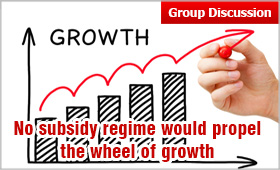 Quite recently the Government decided not to sell the petroleum and petroleum products on subsidised rates. However, since cooking gas needs to reach in each household of the country, the subsidy on it has not been withdrawn but the appeal not to avail subsidy on LPG was issued by none other than the Prime Minister of India, Mr Narendra Modi. Thousands have given up the subsidy on cooking gas and this will help to redistribute such saved money to get the cooking gas to poor.

Subsidy elimination is one of the hot topics of discussion in GD round at B-schools. It is important to understand the facts behind it, how it will help to improve economic growth and what hurdles it would face.

Key facts
Populist government finds it difficult to do away with the subsidies for fear of losing its popularity. Although subsidies are commonly believed to help the poorest, most of the benefit actually accrues to the highest income households. The benefits of Petroleum subsidies including diesel are the most regressive, with over 80 percent of total benefits going to the richest 40 percent of households.

Subsidy elimination can make up the deficits
Eliminating the subsidies can help reduce the large budget deficits India has so far accumulated. Budgetary savings can be redirected to programs to mitigate any adverse impact on the poor.

India has been incurring a loss of around Rs.140,000 crores every year on account of subsidies and under recoveries(Difference between the cost and regulated price at which retailers get these products) on petroleum products.

Elimination of LPG subsidy: May lead to more energy resources
Pricing of Liquefied Petroleum Gas (LPG) becomes the hot debatable topic whenever there is any subsidy cut. Looking deeper into the facts we find that India is said to be living in rural areas and most of this Rural population do not use LPG. Cow dung/farm waste/scattered wood and Kerosene, if made available through PDS are used in rural areas. LPG in fact is the fuel of middle and rich class residing in the urban area. It is proposed that LPG will now reach every household in rural area also. The amount of revenue so received while scrapping the subsidy may be used to provide LPG in rural areas, to develop solar, gobar gas, wind based renewable energy plants, that may benefit more rural and poor population and will ultimately reduce dependence on petroleum products.

Funds saved will add to growth
Withdrawal of subsidies in a planned manner will make the long stuck funds free for various social welfare programmes and shall put the economy on the fast track of growth.

Neither the Reserve Bank of India nor the rating agencies shall have any adverse opinion to this factor. With the curtailed supply of subsidized LPG cylinders and the petrol prices already at the international market trend, the government has already freed around Rs.55000 crores which may become instrumental to make the government more popular as it may effectively implement the social welfare programmes.

While Indian economy has been reeling under the pressure of monetary as well as fiscal deficits, no substantial gain for the benefit of the rural and the poor could be made given the high scale of subsidies in petroleum products. The elimination may bring more competition in oil industry like public v/s private sector. Reliance, Essar, Shell and the future joiners may have the price war in petroleum retail.  It is also possible that the government might reduce various taxes and duties like excise, sales, trade, once the subsidy is withdrawn. This will also reduce the prices on these products.

Need is to install more renewable energy plants
Almost 400 million people in India have no access to electricity, and kerosene is used by a large number of them for lighting. Irony of situation is that the rural population does not get even one litre of Kerosene from the Fair Price Shop despite making many rounds to it since the person holding the license to the PDS shop prefers to black market the kerosene instead of providing it to the entitled ones. All these woes can be redressed with the strong ground work of installing renewable energy plants and bringing about awakening among the rural masses.

Need for implementation
If implemented judiciously neither the government nor the consumers are going to lose and social welfare programmes shall get a shot in the arm.  It will be a win-win situation. The popularity of the government will get a boost and the society as well as economy will march faster on the path of development... Read More GD Topics