Fake News will kill Social Fiber of India unless checked 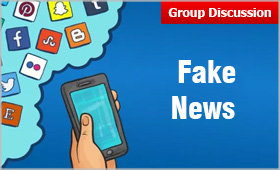 Proliferation of user based platforms such as Facebook, WhatsApp etc. and availability of inexpensive internet and Social sites have led to the unprecedented rise in the instances of Fake News among the masses.

How Internet and Social Media have disrupted the traditional news channels?
A few decades back, when internet usage for news propagation was minimum, the onus of the authenticity of news lied on the media fraternity. Information creation and its distribution was much more expensive and regulated. However, social media sites provided the users with an unregulated platform where, anyone one can create and disseminate information. Barriers to check the authenticity and veracity of the news propagated through social media platforms hardly exist.

Why Fake News are Created?

How Fake News is killing the social fiber of India?
The following incidents happened in the backdrop of false messages pertaining to child kidnappings spread via platforms like Facebook and WhatsApp messaging service, in which nearly two-dozen people in India have been killed by the mobs driven by Fake News. These incidents are not restricted to a particular place but are widespread among different states of India:

Karnataka: In the Murki Viilage Bidar, Karnataka, a mob of over 200 people assaulted Mohammed Azam, a UK-educated IT worker and his friends, over the false assumption of them being child Kidnappers. Mohd. Azam succumbed to death and at least two of the others were critically injured.

Manipur: In the Champhai and Saikul villages of Kangpokpi district, Manipur, two unidentified men were brutally beaten up by the locals on the suspicion of being child-lifters.

West Bengal: In the outskirts of Bolpur town of West Bengal a middle-aged man was severely beaten up by villagers on suspicion of his being a child-lifter.

Maharashtra: In Rainpada Village, a remote location of Maharashtra five people were brutally thrashed by a mob leading to their death. The incident is believed to have been triggered by rumors pertaining to child-lifting gang being active in the area.

Tripura: Sukanta Chakraborty, a person hired by authorities in South Tripura to dismiss rumours of child-lifters was lynched by a mob leading to his death.

Presence of Fake News is not new; however, the social media platforms have amplified its reach and propagation speed. Fake news today spreads faster than anything. As majority of the consumers do not cross check the authenticity of the forwarded messages, this in turn is creating hysteria among the masses. Absence of a regulatory mechanism to contain fake news can have numerous ramifications. It may fan the sparks of communal or religious violence, which could be of disastrous nature.