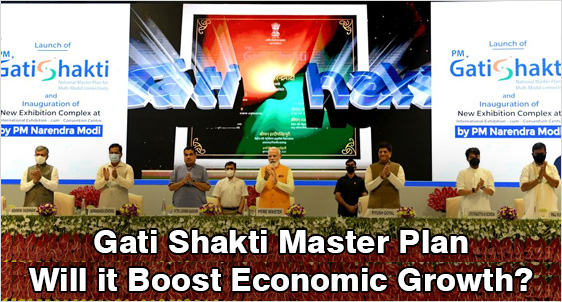 The Prime Minister of India, Shri Narendra Modi has launched the promised ‘PM Gati Shakti National Master Plan’ on October 13, 2021 for multi modal connectivity. On the occasion, the Prime Minister said, “It will help India realize its dream of becoming the business capital of the world.”

The Prime Minister had announced the plan on the occasion of 75th Independence Day from the ramparts of the Red Fort on August 15, 2021 in the celebration year of ‘Azadi ka Amrut Mahotsav.’

The salient features of the PM Gati Shakti National Master Plan are:

Need of the Gati Shakti Programme
On the occasion of launching the Gati Shakti initiative, PM Modi stressed on the wide gap between macro planning and micro implementation, problems of lack of coordination, lack of advance information, and how thinking and working in silos were leading to hampered construction and wastage of budget. All this has led to launch of this programme. Now, most of the mega projects under the Rs 110 lakh crore National Infrastructure Pipeline will be monitored under Gati Shakti.

How the Gati-Shakti Plan Works?

Faster Plnning & Execution: Principal Aim of Gati Shakti
Gati Shakti aims to lend more speed (Gati) and power (Shakti) to projects by connecting all concerned departments on one platform. The Gati Shakti initiative has been an important part of a massive infrastructure push of the Modi government's key initiatives in the second term.

This programme is required to help in coordinating and synchronising the activities of each department, as well as of different layers of governance, in a holistic manner by ensuring coordination along with bridging the gap between planning and implementation of the projects at various levels.

Infrastructure Development Targets under Gati Shakti
The Rs 100 lakh crore Gati Shakti National Master Plan fixes targets up to 2024-25 for all infrastructure ministries and presently has following targets to be completed by 2024-25:

Accordingly, the success of Gati Shakti plan depends upon the proper coordination among various departments of Central and State Governments, proper planning, and effective implementation

Hope this topic discussed in detail must have been found useful by you to know all about the Gati Shakti Plan and its pros and cons. MBAUniverse.com will post more relevant topics to help you getting through the GD, WAT and PI round