IIM Bill 2017: Is it really beneficial for the students? 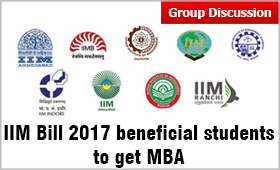 IIM Bill, now known as IIM Bill 2017, seeks to bring many changes in status of IIMs, their autonomy, education system, governing bodies, empowering IIMs to award MBA degree instead of PGDM diploma which they award now.

For the last few years, IIM Bill was under consideration and lot of debate & discussion on it in the IIM circles and at the MHRD level had been going on over the various provisions of the bill.

The bill was approved by Cabinet and in Monsoon session of 2017, the IIM Bill 2017 was passed by Lok Sabha (The lower house of the parliament). The bill was proposed to be taken up in Rajya Sabha on August 9 but could not be passed due to adjournment and would be taken up later in next session. However, since the IIM Bill 2017 has already been passed by Lok Sabha, it is supposed to be passed in the next session by Rajya Sabha.

Now the long cherished dream of IIM passing out students to get MBA from their IIM would come true as IIMs would be vested with the statutory powers to award MBA degrees now.

According to IIM Bill 2017, students of all the 20 IIMs would be awarded MBA degree instead of Post Graduate Diploma in Management (PGDM).

Beneficial for all stake holders

Full autonomy is proposed to be given to IIMs in regard to their administration, recruitment and daily functioning.

Government also has role to play

Despite all the provisions of autonomy, Government of India in certain areas has its key role to play: