Covid Lock Down in India: After 1st & 2nd Wave; 3rd wave of Covid with Omicron and Deltacron; Impact on Economy, Pros & Cons 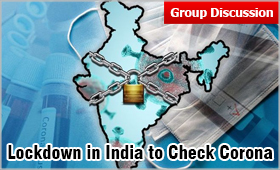 India has remained under full or partial lockdown more than six times since March 21, 2020 till December 2021 during the first and second wave of Covid-19 pandemic, and now the third wave of Covid with new virus Omicron and Deltacron has started spreading fast beginning with the dawn of new year in January 2022. Despite large number of vaccinations going beyond 100 crores in India, the fear of Covid is gripping the masses as another phase of lock down and day/ night or weekend curfew in many states like Delhi, Maharashtra, Karnataka, Kerala, Gujarat, Uttar Pradesh has been imposed apart from imposing restrictions on gatherings.

The economy which was already reeling under the impact of first and second wave of Covid pandemic, has recently started looking up. But with the beginning of the third wave in January and experts predicting it to be moving toward the peak in February 2022, it appears that the economic slowdown may again occur in near future.

Series of Concessions to Boost the Economy
Prime Minister Narendra Modi announced measures with some relaxations to ensure that the Food Safety of India was protected. The PM also announced relief package of Rs.20 lakh crores for various sectors to propel economic growth. Relaxations were provided to Red, Orange and Green zone areas during the Lockdown to protect the Medium and small scale industrial sector, farm and trading sector. In addition to farming sector, the concessions were offered to kick start the economy and support people who had lost their livelihoods and businesses on the verge of collapse. Modi Government had announced Rs.20 lakh crore relief package for all these sectors that was disbursed in five phases.

First & Second Wave of Covid Pandemic in 2020 & 2021: More Fatal
In the first and second wave, Entire country remained under lockdown followed by 4-5 Unlock-down phases in 2020 and 2021. More than 1 crore people in India got affected by Covid-19 and lakhs of them lost their life during the first and second wave of Covid pandemic. Strict measures with complete or partial lock down were taken to control the first wave that started in March 2020 and as such the first wave reported fewer fatalities than the second wave that coincided with West Bengal Elections and one month long Kumbh at Haridwar in April-May 2021.

Beginning of Covid-19: Back Ground
The Prime Minister of India, Shri Narendra Modi earlier appealed to 1.3 billion people of India to observe voluntary self-imposed ‘Janata curfew’ from 7 AM to 9 PM on Sunday March 22, 2020 and asked them not to come out of their houses unless very much necessary to observe ‘social distancing’ with this lock down across the country.

Another appeal he made to the people, was to thank for the services rendered by doctors, nurses and other paramedical staff at the hospitals, police personnel, security forces, sweeping, garbage collecting and cleaning people, in helping and checking the spread of corona virus. For thanks giving, the prime minister requested the people to clap, chant, blow conch, bang and clatter plates, ‘Thali’ from 5PM to 5.05 PM. People responded in great number.

The appeal had the scientific reason as the corona virus spreads one to one and among the people within few seconds if the healthy person comes in contact with Covid-19 infected person. Another fact is that the Corona Virus remains alive for a few hours when it is transmitted. So, the social distancing can save millions who are isolated and don’t come in contact with infected persons for 14 hours from 7 AM to 9 PM.

Entire country observed the Lock Down and except a few stray cases entire population of the country remained in house and remained isolated for the full day. Millions of people across the country stayed indoors, streets wore a deserted look and bare number of vehicles were on the road on Sunday in an unprecedented shutdown on Modi's appeal for a 'Janata curfew' to contain the spread of the novel coronavirus pandemic, which has claimed over 14,000 lives worldwide.

The success of the experiment encouraged the Union and State Governments to extend this lock down for a longer period to wipe out the dreaded virus. As such, as of now a complete lock down has been announced across the country till April 14, 2020 WEF from 12 midnight on March 24, 2020.

What is ‘Lock Down’?

RBI Announced Policy Rate Cuts: Takes Measures to Counter Economic Slowdown
On March 27, 2020, The Reserve Bank of India joined the big fight with a host of measures aimed at minimising the damage from Covid-19. Reserve Bank of India (RBI) Governor Shaktikanta Das has announced a series of measures including policy rate cuts to bolster economy in the wake of covid-19 menace.

Sharing that large part of major global economies are likely to be heading toward recession, the RBI governor stated that economic recovery in 2020 would be slow. This comes hours after Moody's Investors Service cut its estimate of India's GDP growth during 2020 to 2.5 per cent from an earlier estimate of 5.3 per cent.

Following key policy announcements were made by the RBI Governor on March 27, 2020:

Three-way liquidity injection
— Auction of targeted long term repo operations of 3-year tenor for total amount Rs 1,00,000 crore at floating rate. Will add this to liquidity in the market
— Reduction of CRR for all banks by 100 basis points will release Rs 1,37,000 crore across banking system
— Accommodation under Marginal Standing Facility to be increased from 2% from SLR to 3% with immediate effect till June 30. It will release Rs 1.37 lakh crore into the system. ..

Corona Virus a War
The RBI governor warned not to make mistake as it is a fight never seen before. Outlining the risks to Indian economy from coronavirus, he stressed upon the need to keep the credit flowing to the stressed areas of the economy.

Earlier Complete Lock down in 80 corona hit cities in 22 States was announced by India from March 23 to 31, 2020 to break the chain of further spread of Corona virus following the unprecedented success on one day ‘Janata Curfew’ observed on March 22, 2020.  Now it has been extended across the nation for 21 days till April 14, 2020.

The global spread of Corona virus that originated from Wuhan city of China, has infected lakhs of people with thousands of them dead, across the world including China, Italy, Iran, USA, UK, Canada, Germany, North and South Korea, and many other countries including India.

Since no effective vaccine has been found so far to control the fatal contagious disease, that has claimed  thousands of lives in China, Italy, Iran, USA, India and others, the only way out that has been found a bit effective is complete shut down or lock down of the virus hit area which can result in social distancing and will keep the people away from infection of Covid-19. This could help the country from entering next grave stage of getting community infection spread to the most dangerous level.

List of Services & Supplies Exempted from Lockdown in All States

What remained Locked during Lockdown Period

What happened in case you broke the rules in the lockdown?
Anyone breaking the rules, could be taken into custody and can be punished with simple imprisonment for a term that may extend up to one month or with a fine which may extend to Rs 200, or with both.

Could you go to work during lockdown?
Unless you were the one associated to the essential/emergency services, you could not go to work. Most major cities in the country have ordered private companies to let employees work from home. All offices remain shut till the end of the lockdown period. The central and several state governments have announced relief packages for daily-wage earners and other temporary workers.

Lockdown to Help Checking the Spread of Corona Virus

Braking the Transmission
It is estimated that the one day ‘Janata Curfew’ on March 22, 2020 was a major step in breaking the transmission of corona virus. The day saw the streets across India’s cities as deserted since the citizens stayed indoors heeding Modi’s call for a 14-hour voluntary curfew. It was rated a very successful part of the administration’s effort to curb the spread of the virus across the nation.

Further Spread to Stop Effectively
The further lockdown announced by the respective states after the high level meeting is an extension of the March 22 success. It is understood that it would check further spread of COVID-19 and can break the chain.

Consensus Among All
All the state governments and political parties have come together to fight the corona virus.

All Patients to be Tested
The Ministry of Health and Family Welfare expanded the criteria of people who could be tested to include all patients with pneumonia symptoms or severe respiratory illnesses. Earlier, the bulk of India’s testing was aimed at individuals who have travelled internationally and their contacts.

Meeting the Challenge
Noting that there has been a big increase in cases recently, Lav Agarwal, the joint secretary in health ministry said in a briefing in New Delhi on Sunday March 22, “Our biggest challenge is how do we break this chain of transmission. States have been asked to ramp up their capacity to manage confirmed cases and build or earmark dedicated coronavirus hospitals.” The lockdown is a right step in this direction.

Is the Lockdown in India ‘too slow’ to stop millions of infections?
India’s move to lockdown the world’s second-most populous country may not be enough to soften the impact of the coronavirus outbreak as thousands thronged train stations before services closed. These people risked carrying the infection to the nation’s villages.

Most at risk from the country-wide shutdown are India’s informal workers, who comprise more than 80% of the workforce and are often denied job security and medical benefits. Mumbai alone has more than 8 million migrants from other areas of the country, according to the 2011 census, and an enforced lockdown risks robbing them of weeks of pay.

The lockdown risks worsening an economy that’s already set to grow at the slowest pace in 11 years. India’s rupee has weakened to an all-time low and stocks slumped anew amid a global meltdown in risk assets.

India Declares ‘Notified Disaster’
Government of India as well as State governments are treating and monitoring the situation closely to control the coronavirus pandemic. The Ministry of Home Affairs has decided to treat Covid-19 as a "notified disaster". This enables the states to spend a larger chunk of funds from the State Disaster Response Fund (SDRF) to fight the pandemic.