Media Freedom: Should there be a limit? 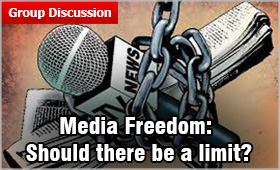 Putting the way that Freedom to express is necessary but absolute freedom without check brings deformities with it, is not without substance. Media freedom is described as the freedom of various kinds of media and sources of communication to operate in political and civil society. Traditionally the propagation medium was limited to print which then was extended to television, and now internet is the latest addition in the mode of dissemination of information.

Why Freedom of Media is necessary?

Media is said to be the fourth pillar of democracy so it is a cornerstone for smooth functioning of a country. The free media in a country facilitates:

Why Media should be regulated?

Freedom in any context is never absolute. Freedom of Media is essential but rising concerns of misinformation, data manipulation, fake news, populism etc. in the current environment are making authorities to place regulations on it to some extent.

Could Media be self regulated?

Accordingly, where the Media does not shoulder the responsibility of bringing the truth and goes to extremes or gets biased, it is better to get it regulated – Self or by legal provisions.