Mission to MARS: Can India afford spending a fortune on such projects? 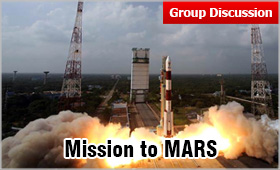 India made its maiden and successful attempt ‘Mission to Mars’ to send Mars craft. World community looked at India’s mission to Mars with awe and appreciation.

Number of B-schools found it a great topic for group discussion whether India was right to launch this mission after spending a good fortune of amount and in view of the other pressing needs of the country.

The Mission to Mars was announced shortly after China's attempt flopped in 2011 as it failed to leave Earth's atmosphere. Japan also tried this mission in 2003 and failed. India had never before attempted inter-planetary travel. This was the first attempt

It had been carried into orbit by a rocket much smaller than US or Russian ones.

Arguments for the Mission to MARS

Arguments against the Mission

India, in long run, will more than recoup the money, invested in space programmes. The immediate benefits are difficult to predict. They may be intangible but vital for the country. This mission has however, kindled the fire of imagination among the young minds to dream about the possibilities of tomorrow... Read More GD Topics