Space Research Projects: Is it Waste of Money? 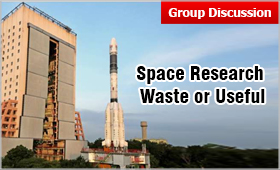 With the landing of ‘Vikram’ & ‘Pragyan’ from Chandrayaan-2 on the unexplored surface of Moon on September 6, 2019, India’s space mission has got another major boost in achieving high standards in space research and joining the well accomplished countries exploring space. A successful landing makes India the fourth country to achieve a soft landing on the Moon after the space agencies of the USA, USSR and China achieved this feat.

Launched at a cost which is less than half as compared to the cost incurred by USA and USSR, India’s Chandrayaan mission is a great space research project and may not be termed as wastage of money as it will help in exploring what has not been explored till now.

Chandrayaan-2 is India’s second lunar exploration mission after Chandrayaan-1. The Chandrayaan-2 was developed by the Indian Space Research Organization (ISRO) and was launched on July 22, 2019 at 2.43 PM (IST) to the Moon from the 2nd Launchpad at Satish Dhawan Space Centre. The space craft was launched by a Geosynchronous Satellite Launch Vehicle Mark-III (GSLV Mk III). Chandrayaan-2 consists of a lunar orbiter, a lander (Vikram), a lunar rover named ‘Pragyan’. All of these were developed in India.

The date of landing of lander ‘Vikram’ and the rover ‘Pragyan’ is September 6, 2019. It lands on the near side of the Moon in the south polar region. The wheeled Pragyan rover will move on the lunar surface and will perform on-site chemical analysis for 14 days (one lunar day). It can relay data to Earth through the Chandrayaan-2 orbiter and lander, which were launched together on the same rocket. The orbiter will perform its mission for one year in a circularized lunar polar orbit of 100 × 100 km

The main objective of Chandrayaan-2 is to map the location and abundance of lunar water. Chandrayaan-2 will demonstrate the ability to soft land on surface of the Moon and operate a robotic rover on its surface. The Moon Craft-2 (Chandrayaan-2) will study lunar topography, mineralogy, elemental abundance, lunar exosphere, signatures of hydroxyl and water ice.  The orbiter will map the lunar surface and help to prepare 3D maps of it and the onboard radar will also map the surface while studying the water ice in the south polar region and thickness of the lunar regolithon surface.

The mission was a major boost to India's space program, as India researched and developed its own technology in order to explore the Moon. The vehicle was inserted into lunar orbit on 8 November 2008.

One of the important GD and WAT topics which is consistently placed in final selection round by IIMs, FMS, IIFT, XLRI and other top MBA colleges is the spending on Space Research and its relevance for the human welfare and impact on environment. Below is shared the solved GD topic on Space Research Projects and their relevance for the development.

In today’s age of inevitable trade wars, battles are fought in the name of technology especially the space technology. In the cold war era space research projects saw a giant amount of money and manpower being pumped by the then USSR and USA not for the purpose of healing humanity but to compete, to compete for the throne of space superpower for the world shall be ruled by the one capturing the universe.

Space research projects throughout history have promised so much and yet have brought so little direct benefits in proportion to mankind. NASA alone has an annual budget of a whopping $21.5 Billion while healthcare in India with a population of a billion more than the United States sees an investment of only around $14 Billion for 2019.

India the largest democracy has around 150 million people living in poverty and yet it spends a tremendous sum of around 12000 crores on space research, too much for an economy which is still developing.

Humanity and life on earth is supposed to be the first priority and the world powers first must ensure fulfillment of basic human needs like hunger, education and better healthcare than living their fantasies of sending man on Mars.

Beginning of Space Race: How it Evolved

The classic space race began after the World War II between the then superpowers USA and USSR. The purpose was to dominate in spaceflight capability which was deemed necessary for national security and symbolized ideological superiority and thus pioneering efforts in launching artificial satellites and space probes of Moon, Venus and Mars took place. Later other developed countries like China, Japan, Canada some European countries and India too jumped in with high ambitions and expenditure.

Spending on Space Research Should Be Reduced: Key Reasons

There are important reasons for spending on space research as many path-breaking discoveries have been made as a result of space exploration.

Although the space research venture has benefitted mankind we may fail to answer whether it has yet revolutionized a human life in proportion to the astronomical amount of money already spent for this purpose.

There will always be arguments, yet Governments need supporting space research as it will open more avenues for mankind. However, it is also important to cater to the urgent and essential human needs. The superpowers also need to chalk out the way to check the space race otherwise the day is not far when man may get lost running the space race.

The ways and means on spending less and achieving more on space missions, space research must be explored. India had set an example on its mission to Mars. As against USA, India was able to contain the cost of the project at Rs.450 Crore (Rs.4.5 bn), less than one sixth of US$455 million earmarked for a Mars probe by NASA.

Accordingly, a much more calculated, organized and rational approach must be adopted when dealing with the subject of space research so that it contributes in healing human lives directly not in killing them indirectly.