Statue of Unity: Symbol of Pride or Wastage of Public Money? 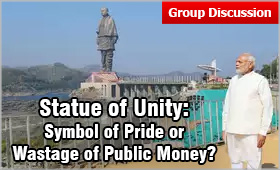 Described as a tribute to Indian engineering skills, the Statue of Unity depicting the 182 metres (597 ft) height iconic figure of Iron Man of India, Sardar Vallabh Bhai Patel, is located in Narmada District of Gujarat at a river Island facing the Narmada Dam. It is the tallest statue in the world and is 4 times the height of Statue of Liberty, New York (USA). The statue was unveiled on October 31, 2018 by the Prime Minister of India, Shri Narendra Modi.

The statue stands as the Pride of Nation but there are many who think that incurring Rs.2900 crores on it, has been a wastage of public money.

With the arguments in favour and against on the construction of this statue making rounds in the economic, social and political circles, the ‘Statue of Unity’ has become a hot topic of Group Discussion (GD) Round in final selection process of various competitive exams and at the MBA colleges GD-PI round. Before you decide to take your view in the GD round, read all about the Back ground, Key Facts, Pros and Cons on the topic ‘Statue of Unity: Symbol of Pride or Wastage of Public Money’

Statue of Unity: Back Ground

Wastage of Money: Cons
Many Social Activists, environment activists and political parties despite agreeing that the Statue of Unity is a pride of nation are of the view that it is wastage of Money especially for a country like India. The reasons cited are: