Terrorism: Is this the price we have to pay for democracy? 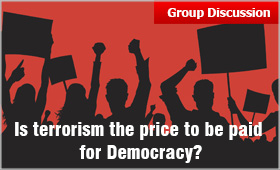 For the topic (Pros)-

Terrorism has been a menace across the world and especially India. Not only at the different platforms in different countries has the issue of Terrorism causing loss of property and life and especially the state sponsored terrorism been discussed, but the top B-schools have also included it as one of the GD topics in their final admission round.

Latest Update:
On 14 February 2019, a convoy of vehicles carrying Central Reserve Police Force (CRPF) security personnel on the Jammu Srinagar Highway was attacked by a young Kashmiri turned terrorist suicide bomber named Adil Ahmed Dar. He was carrying hundreds of Kilograms of explosives in a vehicle at Lethpora (Near Awantipora) in the Puwama District of the Jammu & Kashmir State of India and hit the vehicle to the bus carrying security personnel. The attack resulted in the death of 40 CRPF personnel. Jaish-e-Mohammed, Pakistan-based Islamist terrorist group, has claimed the responsibility of the Puwama attack.  It is the deadliest terror attack on state security personnel since 1989.

As usual, Pakistan has denied any role in the terrorist attack and is asking for more proofs. However, as the Chief of this terrorist outfit Masood Azhar roams free in Pakistan, India as well as other countries across the Globe who are the members of United Nations Organization (UNO) have all the reasons to believe that entire terrorist planning and actions are sponsored by Pakistan and its spy agency ISI as the country has neither arrested Masood nor has handed him over to India.

A few key points highlighting the pros and cons of tackling this socio-political menace of terrorism are suggested below to guide you to get through the GD round.

For the topic (Pros):
India is the worst sufferer of terrorism and the State of J&K adjacent to Pakistan border is suffering more due to terrorist attacks. Terrorist Attacks on Uri security forces camp that resulted in surgical strike, Attacks on Innocent J&K people, the Pulwama terrorist attack by JeM whose leader lives in Pakistan, on the CRPF convoy killing 42 security personnel have left the country in the state of shock.

Recent spurt in terrorist activities across the globe in the name of religion has raised the question mark on the efficiency on the governance, social connectivity, and doubt about the motives of these terrorists. The terrorists impose their own rules, do not allow the society to live in peace and grow, try to stop spread of education, earn money from outside sources just to create terror in the otherwise peaceful society.

Except a few, almost all the countries across the Globe have democratically elected governments by the people, of the people and for the people. The peoples’ representatives get elected after every 4-5 years to run the Government for the welfare of the people. This is largely the ideal thought behind democracy.

But in the name of religion and to earn quick money without good and hard work, youth fall in the net of certain terrorist outfits who brainwash them. These young people who could have proved to be the asset for the society and could be the propelling growth engines, become the killers of their own community and civilization at large without knowing the impact of their misdeeds.

In their mind they think they are doing good as their faith has been misguided by the terrorists. Despite knowing that it is a sing to kill innocent people who become victims of their fanaticism without any fault of theirs, they continue doing the same acts till they fall prey to the bullet of security forces or their own people.

India, USA, France, Afghanistan, Britain, Russia and almost half of the world is suffering from the menace of terrorism. The terrorists who have no religion of their own terrorize the local people to force them to support their acts due to which innocent people are either killed or have to live their life terror struck throughout.

Get to the core to find solution - (Cons)

Nip in the bud

Many people tend to think that terrorism and terrorist acts are caused by certain organizations because of their destructive agenda. It is, however, important to realize that a lot of ideas concerning social construction of deviances go behind why a person becomes a terrorist. Finding quick socio-political and religious solutions to nip in the bud this menace must become the priority of all concerned, if the society is supposed to be saved from this disease.

The shield of human rights, religion is applicable only when you are not violent and do not indulge in criminal activities. It is not possible to kill, pelt stones just for petty money, set the people on fire live, do all the bad things with women, drive your non supporters out of their homes not to allow them come back and hope nothing would happen to you. In fact where reason does not work, other harsh methods are used against terrorism to protect the democratic structure of the society.

Accordingly, unless those who instigate young people on the path of terrorism, are reformed or taken out of socio-political system, the process of rising terrorism might continue putting the democratic fibre of the society in danger.. Read More GD Topics