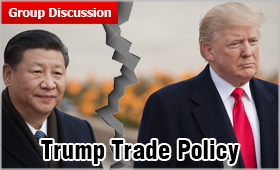 Donald Trump, the 45th president of the United States came to power in 2017 and his term goes upto 2021. During his election campaign, Trump advocated the policy of Protectionism and ‘Making America Great Again.’ His economic policies follow American Economic Nationalism based on the theory of high tariffs to reduce imports, creating more jobs for Americans, reducing the inflow of immigrants, substantially increasing the exports.

The economic policies of Donald Trump therefore, include trade protectionism, immigration reduction, individual and corporate tax reform, the dismantling of the Wall Street Reform, Consumer Protection Act and the repeal of ‘Obamacare’ – the Patient protection and Affordable Care Act.

How America started to Change the Trade Policy: Steps by Trump

U.S. Vs China Trade Policy:  War of Tariffs
While U.S. started it, China retaliated the Trade War. The China–United States trade war refers to the ongoing introduction of tariffs on goods traded between the United States and China.

U.S. Vs European Union Trade Policy
It is not China alone, Trump Trade Policy is creating Trade War with European Union (EU) Counties also. Although, Trump Administration had announced earlier that it would delay the imposition of tariffs on EU countries, Canada, Mexico by another 30 days to renegotiate the trade terms, there was no assurance that more time will yield any breakthroughs.

United States Vs India Trade Policy
India’s Trade with U.S. has been on the rise. However, with the imposition of tariffs by United States, India has to rethink on some measures to protect its interests. Responding to a question on Indo-US bilateral trade, Deputy US Trade Representative Jeffrey Gerrish said that the progress made in bilateral relationship has been truly historic over the last several years.

Rationales by U.S. for Tariffs - Pros
President Trump during his Presidential campaign spoke to follow the Policy of America First and cancel international trade deals creating deficit for the USA.

Tips to improve participation in GD Round
The above discussed topic is one of the most talked about issue and has been carefully chosen and solved with the sole aim to help you succeed in GD round. If you follow a few key tips, you can improve your participation and scores on this GD topic and others: