War Kashmir Crisis: War not dialogue will end the Crisis? 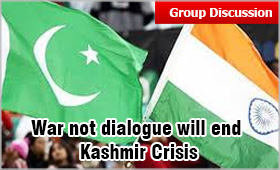 For the last 60 years, since independence in 1947, the issue of Kashmir has been the bone of contention in the Indo-Pak relations. Both India and Pakistan lay their claims that Kashmir which includes the Pakistan Occupied Kashmir part, Jammu, Leh and Laddakh and Kashmir valley are their territory.

In the name of religion terrorists in Kashmir have been spreading hatred, violence and are killing innocent people in Kashmir to get it separated from India. Quite recently evidences that separatist and terrorist leaders are being funded by Pakistan have been unearthed. India despite maintaining restraint to a great extent now needs to resolve this issue once for all to end the crisis.

How to resolve this issue of Kashmir? This has become the hot debatable topic for discussion at every forum. In their GD round for final MBA/PGDM admission process, B-schools have also included this topic to bring out the discussion skills of the candidates.

A good area of Jammu & Kashmir was invaded by Pakistan in 1948 and is still controlled by it. Out of this illegally occupied area, Pakistan has gifted a part of it to China. Pakistan’s calls its occupied area of Kashmir as Azad Kashmir while India terms it Pakistan Occupied Kashmir (PoK). UNO intervened and asked Pakistan to withdraw all the invaders and forces from PoK and conduct Plebiscite as the first step which Pakistan has not done so far.

In order to get control of full territory of Jammu and Kashmir including which is with India, Pakistan has been training and sending the groups of terrorists to create unrest, terrorise Kashmiri people, kill innocent people and instigate them against India. All this is funded through various means by Pakistan.

Till 1989 things were not so bad. However when Mufti Mohd. Sayeed was the home Minister of India, his daughter Rubaiya Sayeed was kidnapped by terrorists. She was released only after the release of 5 dreaded terrorists. This incident spurred terrorist activities and violence in the Kashmir valley and terrorists found the Indian Government, innocent people and families of the VIPs a soft target to make them bow down to their demands.

Thousands of Non-Muslim families of Kashmiri people were tortured and were made to flee Kashmir. The night of January 19, 1990 is still a nightmare for these people. The exiled Kashmiris by their Muslim brethren are still in trauma and are living in make shift camps in Jammu, Delhi and other parts of the country for the last 27 years.

India, despite lot of restraint and facing the treacherous Kargil war is still contemplating how to end the crisis now. The present Home Minister of India Mr. Raj Nath Singh proposes to find the permanent solution to Kashmir problem but does not reveal how it is proposed to be ended. While the war could be the one way but its efficacy to become the permanent solution may be doubtful. Besides, loss of lives, property, and the prime concern of building the progress path of Kashmir would get severe setback.

Getting stuck to the path of dialogue and discussions to end Kashmir crisis has also not yielded any fruitful result and terrorists from different quarters find it easy also to make quick money out of their activities. They are offered money with the prime objective to create terror and fear in Kashmir so that Kashmiris do not march on the path of progress.

For the topic (Pros)- Attack and finish

Dialogue not war is the solution-Cons