Will India become a Superpower in coming decades 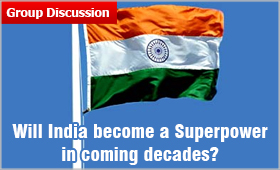 As per Wikipedia, a Superpower is a state with a dominant position characterized by its extensive ability to exert influence or project power on a global scale. This is done through the combined-means of economic, military, technological, and cultural strength, as well as diplomatic and ‘soft power’.

So while there is no agreed definition of what is a 'superpower', fundamental characteristics that is consistent with all definitions of a superpower is a nation or state that has mastered the seven dimensions of state power: geography, population, economy, resources, military, diplomacy and national identity. In this article we will discuss about the seven aspects of Superpower in reference to India.

India as an Economic Superpower
The economy of India is the world's seventh-largest economy by nominal GDP and the third-largest by purchasing power parity (PPP). However, the country ranks poorly at 139th in per capita GDP (nominal) with $2,134 and 122nd in per capita GDP (PPP) with $7,783 as of 2018. After the 1991 economic liberalisation, India achieved 6-7% average GDP growth annually. Since 2014 with the exception of 2017, India's economy has been the world's fastest growing major economy, surpassing China.

Economists rate long-term growth prospective of the Indian economy as positive due to many factors like young population, healthy savings and investment rates, and increasing integration into the global economy. Despite almost two decades of reforms, economic growth is still significantly slowed by bureaucracy, poor infrastructure, and inflexible labor laws (especially the inability to lay off workers in a business slowdown).

What is remarkable about Indian economy is that India has one of the fastest growing service sectors in the world with an annual growth rate above 9% since 2001, which contributed to 57% of GDP in 2012–13. As a result, India has become a major exporter of IT services, Business Process Outsourcing (BPO) services, and software services with $154 billion revenue in FY 2017. This is the fastest-growing part of the economy.

Indian economy can be divided into 3 sectors:

India, growing at 9% per year, is the world's second largest producer of food next to China. Food processing accounts for USD 69.4 billion as gross income.

India is still relatively a small player in manufacturing when compared to many world leaders. Some new trends suggest an improvement in future, since the manufacturing sector is growing at 11-12%.

India currently has an expanding IT industry which is considered one of the best in the world. Some have begun to describe India as a technology superpower. It is considered the World's Office and is leading in the Services Industry. This is mainly due to the availability of a large pool of highly skilled, low cost, English speaking workforce.

Superpower in Geography
India lies in the cultural region of Indian Ocean - a zone with unprecedented potential for growth in the scale of transoceanic commerce, with many Eurasian and increasingly Afro-Asian sea-trade routes passing through or close to Indian territorial waters.

Being a region in the sunny tropical belt, the Indian subcontinent could greatly benefit from a renewable energy trend, as it has the ideal combination of both - high solar insolation and a big consumer base density. All the above factors help India to become the Superpower in terms of Geography.

India as a Population Superpower
ndia is the second most populated country in the world with nearly a fifth of the world's population. According to the 2017 revision of the World Population Prospects, the population stood at 1,324,171,354.

This provides the nation with a large workforce for many decades, helping in its growth.

Tourism: India, with its diverse and fascinating history, arts, and music, and culture, spiritual & social models has witnessed the growth of a booming tourism industry. India is a historic place with a diverse history of over five millennia. About 3.9 million tourists travelled to India in 2005, each spending approximately $1,470 per person, higher than that of France (the leading tourist destination in the world).

Energy: In the future, the world is expected to exit the "fossil fuel age", and perhaps the "nuclear energy age", and enter the "renewable-energy age" or even further into the "fusion power age", if and whenever these technologies become economically sustainable.

India also has 25% of the world's thorium resources.

Superpower in Military:
The Indian Armed Forces, India's main defence organisation, consist of two main branches: the core Military of India and the Indian Paramilitary Forces. The Military of India maintains the second largest active duty force in the world after China, while the Indian Paramilitary Forces, over a million strong, is the second largest paramilitary force in the world. Combined, the total armed forces of India are 2,414,700 strong, the world's third largest defense force.

The Army of India, as the Indian army was called under British rule before 1947, played a crucial role in checking the advance of Imperial Japan into South Asia during World War II. It also played a leading role in the liberation of Bangladesh in 1971. Today, the Indian Army is the world's largest army in total numbers of armed personnel.

The Indian Navy is the world's fifth largest navy. It is considered to have blue-water capabilities with sophisticated missile-capable warships, aircraft carrier, minesweepers, advanced submarines and the latest aircraft in its inventory, along with a significant use of state of the art technology that is indigenously manufactured. It operates one aircraft carrier and also plans to induct the INS Vikrant by 2020 followed by a larger INS Vishal.

Superpower in Space
On March 27, India shot down a low-earth orbit satellite in space, propelling itself into an elite club of nations, which has mastered this anti-satellite (ASAT) missile technology, said PM Narendra Modi in his address to the nation. PM Modi was quick to point out the intent of DRDO's "Mission Shakti" is to defend India’s space assets and not to start any arms race in space. Since there are no treaties governing the use of ASAT, India is not in violation of any international conventions.

A look at what is Mission Shakti why it is path-breaking:

Superpower in diplomacy
India is the world's largest democratic republic, more than three times bigger than the next largest (the United States). It has so far been successful politically, especially considering its functionality despite its difficult ethnic composition.

Factors against the rise of India as a Superpower
While above factor forces India to be the next Superpower. There are some factors which hinders the growth of India as a country.