Social Activism is necessary for survival of democratic society 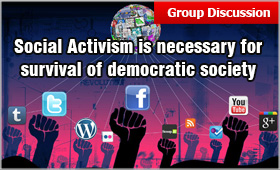 To make the Government work for the welfare of the people and keep the society safe, experts have been debating on the issue of social activism that may function as catalyst to keep different agencies working.

With the recent increase in incidents against common people, women while different Government agencies remaining apathetic to their roles towards people and society, the need for social activism has been felt more. The topic has found place in B-school GD round also.

Below is shared the excerpts of GD round in a B school which has recently conducted its final admission round. There were 7 participants in the GD and the time allotted was 15 minutes. Names of the candidates changed to protect the identity.

Moderator - Good morning friends. The topic for today’s Group Discussion is “Social activism is necessary for survival of democratic society”. You have one minute to think before starting the discussion. The observers will neither interfere nor participate in the discussion.

(Immediately after the moderator leaves, murmurings begin for a few seconds and before the completion of one minute a candidate’s voice brings about silence all round)

Rishab ( In a clear but sharp voice)- Friends Let us understand what Social or any activism is before expressing our views. In my view, the activity that awakens the sleeping people about something going wrong and enlightens them what remedies are to be taken to get the things in order – by themselves, by the arms of constitutional forces – Parliament, Legislative assemblies, executive bodies –administration, government and the Judiciary, is the activism that would protect the interests of our Democratic system of society.

SwarnaPrabha – (With a smiling face but firm voice)- Aptly said, but what we need to know is whether this activity is necessary all the time and whether it should turn violent at all- so number of factors are there. Friends, there are three major words related to the topic - Activism, Survival, Democracy. I emphasise that the activism is necessary all the time but it shouldn’t ever take the violent shape. Voilence brings about huge loss of life and public property which is a national loss and must always be condemned. Constant vigil is the price to be paid for survival of democratic society.

Rishabh (Taking a clue from her presentation, makes second effective entry) - Exactly, the activists in a democratic society constitute the enlightened citizens of the society, print and electronic media, social activists, reformers. More than 60 years have gone by, since we adopted Democracy. Our constitution clearly mentions that every citizen- regardless of gender, caste, creed- shall be equal before law and no discrimination shall be made on such grounds. But the daunting realities have contradictory stories to unfold. India – with its thousands of sub-castes stands divided on the basis of social divisions at every nook and corner. People, children, women are suppressed. The need of social uprising arises here. These are the social activists who raise a voice against such atrocities and let the world know about the same.

Meenakshi – (Intervening) – Both of you mean to say that the law makers, implementation agencies and judiciary- all are useless bodies and these are the activists who run the system? (A few protesting voices are heard but Meenakshi raises her voice)  Activism whether in print, speech, electronic media, may instigate violence which is harmful for the society and economy. It is very difficult to have a controlled activism when the passions run high on emotions. Swarna Prabha herself doubts this methodology, so when this happens- many people get injured and there is a loss of national property as well. This in fact is detrimental to the survival of society. Democratic values are granted by the constitution and these are the government agencies who should see to it that the same are duly implemented instead of creating obstacles in public life and hampering the lawful process. All the Dharna, road blocks and gatherings hamper the everyday life and cause problems to the society.  So we have to be aware of it for our own benefit. Any issue can be addressed through the laid down procedure.

Rajesh – Well said Meenakshi, we cannot leave the house open and unlocked and expect safety as well. Necessary precautions for our own security are required. Constant vigil in democracy means to remain watchful and not to take to streets on all the issues. On the contrary, it would mean that we have no trust on the system that we adopted for our well being.

Mridulaxman- (Shaking his head sideways) – We now know very well- what the Activism is. In fact these are the activists who educate the people, garner their support and try to get the wrong doings rectified.  With all this activism sometimes the things get better and sometimes the activists are crushed to be replaced by more activists fighting for a just cause so that the promises granted in the constitution are kept. (Taking a deep breath and giving a sign that he intends to speak further, he begins again) Safety and empowerment of Women who are the catalysts of economic growth and social justice in a great democracy like India go on lacking despite all the rhetoric and formation of laws. While the constitution gives all the rights to women, their plight is far from solved. Women folk do not feel safe while moving from one place to another. They are not safe even in the big cities like Delhi, Mumbai, Hyderabad, Mangalore etc. where thousands of women work shoulder to shoulder with men. Tragic incidents of gang rape, kidnapping, chain snatching and even atrocities by the defenders of law to them take place.

Surendra Kumar- In a civilized democratic society one’s right is other’s duty – unless this doctrine is meticulously followed the survival of society is difficult. There should be a stricter law to enforce against those who think of their rights only and not of their duties. Any activity in favour of one aspect may cause other confronting activity on other issue. This may flare up the path of confrontation as sometimes happen in issues like reservation in jobs, religious issues etc.  It is better to nip in the bud before any activities on sensitive issues take place.

Divya- In my view without activism society cannot survive. In a a country that got freedom after so much struggle and formed a great constitution for making the country a welfare state bringing liberty, equality,  fraternity with a view to make them feel free and safe, it has to be checked that the said values are not dying and their growth and betterment are being ensured for the survival of a free and vibrant society.

Mridulaxman (Making second entry) These are the social activists who cry foul, get the public opinion formed, gather in thousands, make the government bow before the constructive activism for the lapses committed by it.  Story of Vasant Dhoble, a policeman of Mumbai who got women paraded in front of Cameras calling them prostitutes, two girls who were caught by police simply for awakening the society for unnecessarily paralyzing the city of Mumbai, ghastly bus gang rape in Delhi – that made the democracy veil its face in shame- got instant social activism sprung up with such intensity where entire nation became united and demanded due justice to the sufferers. This is the power of activism which infuses life in the dying democracy. The sleeping leaders and lawmakers come to life and fierce debates and discussions for the survival of democratic system begin all over the country.

SwarnaPrabha-(Making second entry) – You cannot place a cop at every corner, these are the people who have to watch the interests of their society. This is the fear of activists that corruption and corrupt practices are catching the attention of people at large.  The irregularities committed are being highlighted. Those who are under the watchful eye of activism – which can be media, social networking, NGOs etc. now think twice to go for such corrupt practices. Demand for ‘Jan Lokpal Bill’ by Civil Society, agitations by Shri Anna Hazare, revelations by Shri Arvind Kejriwal and his team and such other activities have revived the democracy in India.  One can now hope for a better future.

Rishabh-(Making third entry) - Democratic values should lead to the welfare of people which is the spirit of Democracy. Since the choice is always between the means and the end, the end is more important. The activism with its non-violent nature makes its voice heard consistently to attain the end of preservation of democracy which works for the people. Democracy, that is in danger now, is the form of government the visionaries and constitution makers of our country adopted while declaring India a Sovereign, socialist, secular democratic Republic which shall function as the government of the people, for the people and by the people. Is the government functioning as per the guidelines or has deviated -has to be ensured with the active participation of the people who are awakened by the Activists...Read More GD Topics