Nirbhaya Gang Rape: Death penalties for perpetrators of crime against women. Will it reduce crime? 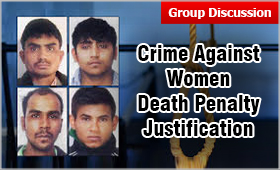 After more than 7 years of committing the heinous crime, the convicts of Nirbhaya gangrape and murder case - Akshay Thakur, Pawan Gupta, Vinay Sharma, and Mukesh Singh - were hanged at 5:30am in Tihar jail on March 20, 2020. The hanging was carried out as per the schedule after a three-judge Supreme Court bench rejected the final plea by the convicts' lawyer AP Singh to stay their execution in a late-night hearing.

After the execution of SCI order of hanging the culprits, Prime Minister Modi said, “Justice has prevailed. It is of utmost importance to ensure dignity and safety of women.”

Union Law Minister Ravi Shankar Prasad said, “It's a day of satisfaction that a daughter, who underwent so much pain, has got justice.”

Union minister Smriti Irani said, “Nirbhaya case convicts' hanging is a message for every criminal that one day law will catch up with you. I greet this day with aplomb that justice has finally been done to Nirbhaya.”

The four convicts in the Nirbhaya gangrape and murder case, who were hanged on Friday March 20, 2020 in morning, had not expressed any last wish. As per the law and tradition the death row convicts are asked about their last wish before hanging.

One of the convicts of the 2012 Nirbhaya gang-rape and murder case, Mukesh Singh, wished to donate his organs and had given it in writing to the authorities.

On January 7, 2020, Supreme Court issued death warrants for all the four convicts in the December 16, 2012 Nirbhaya Gang Rape and Murder Case and announced that convicts would be hanged on January 22 inside the Tihar jail. However, since then various pleas and petitions were moved in the various courts to linger on the process which took three months to execute the hanging order.

Hours after the court’s decision, Chief Minister Arvind Kejriwal tweeted, “there is some sense of satisfaction after the issuance of death warrant against the convicts in the Nirbhaya case. It took seven year. This system will have to change. Such a system must be put in place which ensures that rapist are hanged within six months”.

The National Commission for Women (NCW) said the verdict would act as deterrent to crime against women.

While no sane mind will like to leave the perpetrators of such heinous crime unpunished, the question remains – is death penalty the best way to punish, and deter future occurrences of such a crime. In this context, this Topic is likely to be a Hot GD Topic for MBA entrance this year. Let’s understand this topic in detail.

In recent years, the rising crime rate, particularly violent crimes against women has made the criminal sentencing by the courts a subject of concern. According to the former Chief Justice of India, Justice Dattu “The sentencing policy adopted by the Courts, in such cases, ought to have a stricter yardstick so as to act as a deterrent. There are a shockingly large number of cases where the sentence of punishment awarded to the accused is not in proportion to the gravity and magnitude of the offence thereby encouraging the criminal and in the ultimate making justice suffer by weakening the system’s credibility.”

A group from National Commission for Women also requested Capital Punishment for those who indulge in severe crimes against women.

Is Death Penalty a Solution?
Not everyone in India accepts death penalty as the only way to provide justice. Presently death penalty is given only for the "rarest of rare" cases. The interpretation of such cases is left to the court. The country's last execution was on 30 July 2015.

Lets try to understand the other point of view on this widely debated topic. Civil society members give these arguments against Capital Punishment:

So, while no sane mind will like to leave the perpetrators of such heinous crime unpunished, one must debate if Capital Punishment is the best way to punish, and deter future occurrences of such a crime.